You are here: HomenextChapelsnextWiltshirenextA - CnextBradford on Avon Primitive Methodist chapel 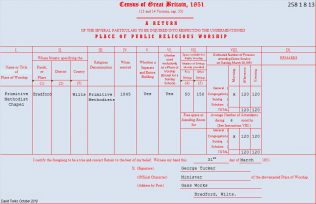 David Tonks is transcribing entries for  Primitive Methodist chapels that feature in the 1851 Census of Places of Public Religious Worship. This is what he found when working on Bradford on Avon – in my old part of the world.

“While working on the Census form for this place I went to the 25” map from the National Library of Scotland site (which I use to find all my grid references).  It shows a ‘Meth Chap (Prim)’ and I noticed it had the symbol for a Ordnance Survey bench mark (not the first one I’ve spotted) and wondered if there might be an online database of benchmarks.  Of course there is, and searching for the grid reference I found an entry for the benchmark on ‘The Old Chapel’ on Sladesbrook www.bench-marks.org.uk/bm65514.  This provided a link to Geograph where there is a photo of the chapel – www.geograph.org.uk/photo/4417967

Of course this may not be the PM chapel of 1851, erected 1845, but from the photograph it may well be.  I am sure your local knowledge will help in the identification.

George Tucker who completed the return was not an ordained Minister.  On the population census return his address is given as ‘Frome Road Gas House’ and his occupation as ‘Gas Maker (Journeyman)’.  So he was probably the Local Preacher who took one of the services on Census Day.”

I didn’t even have to move from my desk to find a convincing piece of evidence that David has identified the correct building.   Although Street View shows that the name stone of the chapel has been removed, it still carries the date 1845 at the very apex of the roof.  The chapel is now (2019) a holiday let.

Another piece of the jigsaw has now fallen into place with the discovery in the 1846 Primitive Methodist magazine of an account of the opening of the chapel.

“Bradford, Bath Circuit.—The Primitive Methodist preachers of the Bath circuit first visited Bradford in February, 1844, and preached in a large upper room formerly occupied as a weaver’s shop. For a few weeks the congregation was small, consisting of about 30 persons ; but success having attended the word of life, a society was afterwards formed, and the attendance increased so as usually to fill the room, and sometimes to crowd it excessively. In the spring of 1845, a building site was purchased not far from where we worshipped ; and hereon a chapel was soon erected.

The opening services took place on the 13th, 16th, and 17th of November, 1845 ; and Messrs. H. Pope, (Primitive Methodist,) J. Floyd and W. Box, (Wesleyans.) J. Owen, (Countess of Huntingdon,) and B. Wills, (Independent,) officiated on the occasion. The congregations were large and attentive, the ministers powerful in address, and the collections very liberal. The present attendance is highly encouraging, the sittings are well let, and we have a good prospect of usefulness in the locality. R. Tuffin.”

The 1866 Primitive Methodist magazine of an account by W Mottram of the re-opening of the chapel in December 1865 after they spent £20-£20 on improvements and repairs. Speakers included Rev Dr Leechman (Bath), Rev J Lowell (Wesleyan), Rev J Newell (Baptist), and Mr G Humphries (Bath).