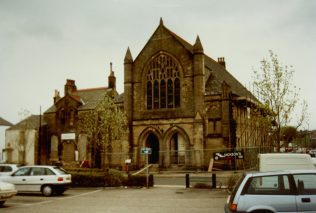 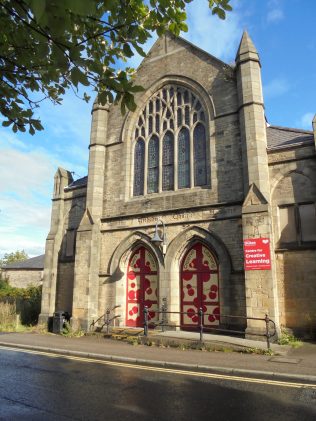 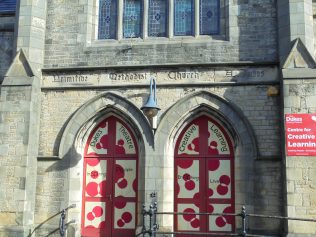 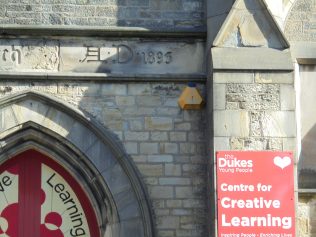 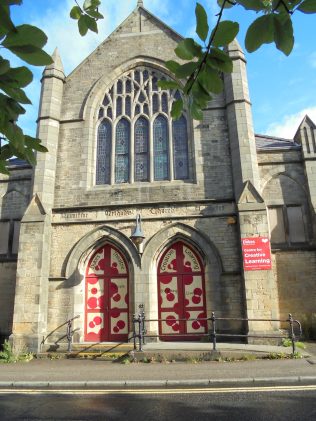 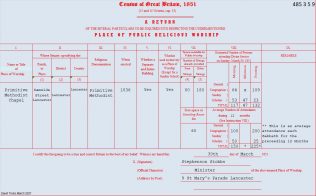 zoom
Lancaster: return from the Primitive Methodist chapel to the 1851 Census of Places of Public Religious worship. Return no: 485 3 5 9
transcribed by David Tonks 2021

The first Lancaster Primitive Methodist chapel dates from 1836 and was a converted coach house. There were problems to do with the title deeds and disagreement amongst the trustees (“Barkerism” is blamed, whatever that was) which meant the chapel was lost for a time,

The return from the Primitive Methodist chapel to the 1851 Census of Places of Public Religious worship was completed by Stephenson Stobbs, the minister.  It locates the chapel in Damside Street and describes it as  a separate and entire building, used exclusively as a place of worship except for a Sunday school that held 260 people. The Census numbers show there was a Sunday school that met three times in addition to two services for the adults.

With the arrival of Thomas Bennett in 1852 numbers rose and a new chapel, named Ebenezer, was built in Moor Lane. The foundation-stone was laid on Whit Monday, 1854, by E.Dawson.

The chapel accommodated 230 people, measured 14 yards by 11 yards and was high enough for a gallery. It was built of stone, rock faced. The cost was £430, of which a third had been raised. “Mr.T. Jackson, one of the trustees, will lend on notes of hand, at four per cent, all the money we require”. The account gives a list of other donors, including the vicar of Lancaster

In 1895 it was rebuilt as a large Gothic chapel seating 520 with a large perpendicular style window in the Moor Lane frontage.

The first World War memorial contains the following names connected with the church:

It was closed in the 1960s and at the time of Keith Guyler’s photograph was being gutted for development.  Google Street View in 2009 shows it used as a community centre and performance space.