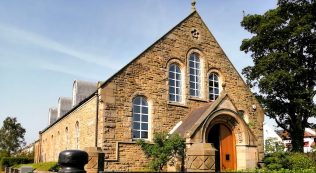 The 1883 Primitive Methodist magazine contains a note of the opening in 1882 of a new Primitive Methodist chapel in Gosforth. Emma Robson was the daughter of “an old and faithful worker in our church at Gosforth” and the family gave £300 to the church in her memory.

The chapel congregation came from Bulman Village Chapel. It seated 221. The chapel was in use until 2000 and then became Northern Rock Offices. On Street View it is in use by the Community Foundation and named Philanthropy House.

Thanks to Richard Jennings for providing the picture.