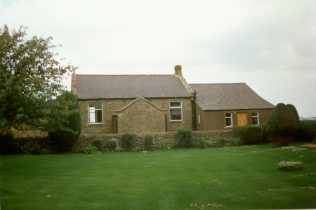 The chapel was built in 1848 although there is a stone inscription dating it to 1818. The opening is reported by R Davies in the Primitive Methodist magazine. Opening celebrations started on July 9th 1848.

“Ingoe had a chapel as early as 1848. The Brodie, Harrison, and Proudlock families gave this village church strength and status long ago, and there are yet Harrisons to look after the concerns of the rural society. George Richardson, a remarkable man, also dwelt at Ingoe some years ago. Matthew T. Pickering says Richardson was noted for two things: his knowledge of the Scriptures was wonderful, and he was a seer. William Dawson, of Blyth, a native of Matfen, and one of Richardson’s spiritual children, writes :—“Put him in your history, and say he was a man of God, who, being dead, yet speaketh in the heart and life of one among many he led to the Saviour, nursed in the faith, and set before him high ideals of Christian service.” Strange stories of an occult character are told about Richardson and Ralph Ramsey, of Bavington, and his wife. Ralph was singularly quaint and of great spiritual insight. He was of the band referred to by Mrs. Porteus, all of whom were held in high esteem for their consistency and goodness.”

The chapel closed and in 2013 there was an application to turn it into a house.