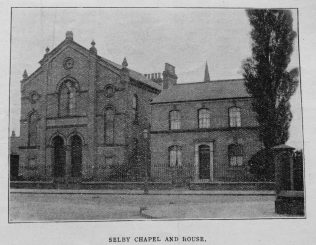 An article in the Christian Messenger by Rev. F. Winterburn  sets out the story of the start of Primitive Methodism in Selby.

The first preaching place of the Primitive Methodists in Selby was an upper room off Finkle Street. In 1840, a chapel was built in a yard off Gowthorpe and served till 1862, when the present chapel was built at the corner of Gowthorpe and Brook Street, one of the finest sites in the town. The position will be further improved by the opening of a street which is to lead to a new residential area. The cost of the chapel, with the school and the minister’s house was only £2396, not an extravagant price for a set of most serviceable buildings. The chapel has sitting accommodation for four-hundred-and-seventy persons. The only debt in the circuit is on the Selby property, and that debt is but £75.

The laying of the foundation stone on April 4th 1862 (which did of course include a celebration tea) and the chapel opening on October 10th 1862 are described in the Primitive Methodist magazine by JR Parkinson. He gives glorious detail ; ” The
orchestral recess is lighted by a window on each side, and opens into the chapel with a hold, semi-circular arch, ornamented with an architrave and trusses at the springing line. The chapel is fitted up with gas, a handsome pendant hanging from the centre flower of a geometrical pattern, with sixty jets, thus forming an important feature in the interior.”

There’s an account in the 1870 Primitive Methodist magazine  by J Calvin of the re-opening of Selby Primitive Methodist chapel on July 24th  1870 when Rev J Wood was the preacher.  The chapel had been built 8 years previously and had been painted and varnished throughout

The chapel closed as a place of worship in August 1956. For several years following, it was used as a tyre depot, but the building was eventually left derelict and fell into disrepair in the late 80s. In 1992, Selby Town Council bought and renovated the premises which now houses the Town Council offices as well as a main performance space and a smaller studio room.