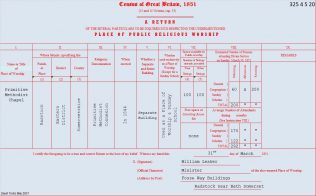 zoom
Radstock: return from the Primitive Methodist chapel to the 1851 Census of Places of Public Religious worship. Return no: 325 4 5 20
transcribed by David Tonks 2021

The 1851 Census of Places of Public Religious worship contains a return from a Primitive Methodist chapel in Radstock.  It says the chapel opened in 1844 and accommodated 200 people. On Census Sunday, 200 people attended in the evening and 60 in the morning..  There was also a Sunday school with typically 122 scholars attending.

The return was completed by William Leaker, the minister, of Fosse Way Buildings.

The Primitive Methodist magazine in 1851 and 1852 contains accounts both by the same William Leaker of the laying of the foundation stone  and subsequent opening of what he then calls the first Primitive Methodist chapel in Radstock. Radstock was first missioned around 1825, and “the missionaries met with much persecution until brother George James opened his house for preaching” Later a room was rented. Despite further enlargement, it was not large enough, so land in a “very good situation” was leased from the Countess of Waldegrave on a 99 year lease at a shilling a year.

The November 1851 magazine describes the foundation stone ceremony.  It was held on September 10th 1851 and the stone was laid by Rev T Hobson of Bath.  “The evening was fine, the attendance large, and the collection £3/6/9.”

The chapel was planned to be 37′ x 27′ and 22′ high.  It had a slate roof, a board floor and “a good gallery five seats deep.” There would also be built a preacher’s house, “an ornament to the village”.

John Parfillt, the Countess’ steward, gave the stones for the building and Charles Ashman, the Countess’ agent for the coal works, gave “most of the lime and all the small coal to mix the mortar.”  There was much self building: all the stones were quarried by members and friends; farmers carried the materials freely.

At the time of opening, £300 of the total cost of £500 was owing.  It was borrowed “at 4% on notes of hand”.  The article says that the golden system was used to raise further funds – how did that work?.

I’m not clear exactly where it was.  The 1886 1:2,500 Ordnance Survey map locates the Primitive Methodist chapel at the gas works just north of the junction of Coomb End with New Bath Road. On the 1903-4 map it is labelled Wesleyan.  Can anyone explain?