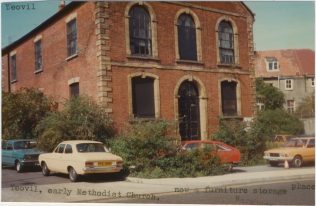 Primitive Methodism in Yeovil was first established in New Town and they had a preaching room in Silver Street, opposite the Pall Inn. They built the chapel in South Street in 1865 for between £600 and £900. It seated 300 and was of red brick with Ham Hill stone dressing.

It closed on Methodist Union in 1932 and became the glove factory of Ivelnap Gloves Ltd.  After Ivelnap closed the building was empty for several years.  In 1996 it collapsed when it was in the process of being converted into an auction room with an extension containing an Arts Centre and shops.

After this the site was cleared. On Google Street View in June 2015 it is used for car parking.