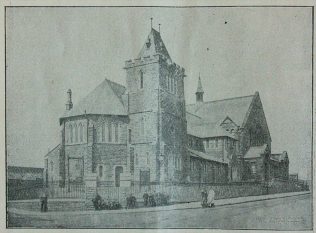 Cardigan Road Primitive Methodist chapel in Leeds was opened in 1895, replacing a tin church of 1877.  It was one of the venues used when the Primitive Methodist Conference came to Leeds in 1898. The 1894 Primitive Methodist magazine reports that building the chapel was part of a long term project: the site had been obtained some years previously and they had just laid the foundation stones for the new chapel next to the existing school accommodation which had been used for a chapel in the short term.

The 1896 magazine reports that the chapel had been opened and tells us a little more.  They had wanted a chapel for a long time but already had a £2,000 debt so could not start.  However, a “friend” offered them £1,000 if the new chapel opened free of debt, so they set to work to raise the money. Rev F Shergold was the minister during the building.

You can read more about people involved with the early development of the Cardigan Road society here.

The cause originated in a tin tabernacle erected in January 1877. School premises came in 1885 and a chapel in 1895, architects for this development being Thomas Howdill for the school and Howdill & Howdill for the church. The closing service on 5 October 1975 was followed by flats being built on the site.