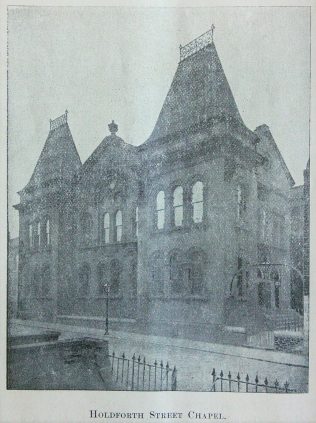 Holdforth Street Primitive Methodist Chapel in Wortley was enlarged in 1879/80. It has an Italianate design of brick and stone by architect T Howdill. It was one of the chapels used when the Primitive Methodist Conference came to Leeds in 1898. A Sunday School was added in 1907.

The chapel closed in the 1950s and was included in demolition and redevelopment plans for the Wortley area.  Holdforth Street itself is not on current Google maps.

The stone was laid by Alderman Thomas Botterill and his words show that not all Anglicans feared the growth of the Prims. “I cannot say that I know very much about your body, but I do remember well, when but young, the influence for good, exerted by this community, in the agricultural districts. I do most heartily approve and applaud your diligence and attention to open-air services ; and only hope that the Church of England, to which I belong, having begun may continue in this respect to copy your example, for I am quite sure it will increase its influence and usefulness.”

Thanks were given to “W.Briggs, Esq., and his lady, for the gift of the land and cost of its conveyance to the Connexion”

The 1879 Primitive Methodist magazine contains a note recording  the laying of the foundation stones for a new Primitive Methodist chapel at Holdforth Street, New Wortley.  The chapel would seat 800 and cost £3,000. This presumably is the enlargement referred to above.