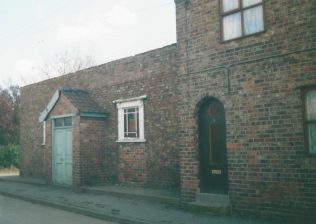 North Frodingham Primitive Methodists built a larger chapel in Foston Lane at the junction with North Townside Road in 1842 and registered it the next year.  The foundation stone was laid by James Harrison on March 21 1842 and opening services took place from August 7th 1842.  The entire cost was £419 ; it seated just under 300 people.

The opening and first and second anniversaries of the new chapel are noted by John Sole in the Primitive Methodist magazine.

The Primitive Methodist Sunday school at the junction of the street and Foston Lane in 1865 was used as a recreation room for the village in the mid 20th century, before being demolished

There was even a Friendly Society.  The Driffield branch of a Primitive Methodist preachers’ provident society was founded in fact at North Frodingham in 1856, had 27 members in 1866, but was discontinued in 1873.