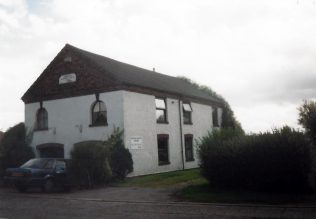 West Cowick Primitive Methodist chapel was opened in 1866 and closed in 1981. The foundation stone was laid by J Eddell of Snaith on May 25th 1866. Preachers at the stone laying included Rev T Whittaker (Scotter), J Longbottom, and the Revs E Talbot and J Mules.

The chapel was opened on July 29th 1866. Opening preachers included Rev H Clark (Doncaster), W Wood (Goole), Rev GF Stephens, J Pearson (Independent), J Mules and J Longbottom. Thanks were due to a number of donors including  Mr Killingbeck (for 10,000 bricks) J Eddel (for £5), Mrs Eddell (for a Bible) and “to her servant for a pulpit hymn book”; J Glew, C Wigglesworth and T Hardy gave donations and “gratuitous labour”

The new chapel cost £110 of which £56 had been raised in advance of the  opening.

Keith Guyler’s photograph in 1999 shows it after it had been converted into a house.  Google Street View in 2009 shows that it retains the stone tablet showing its date of opening.