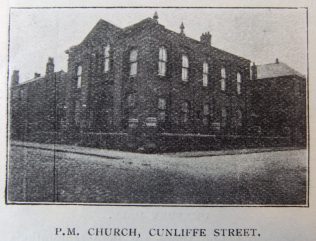 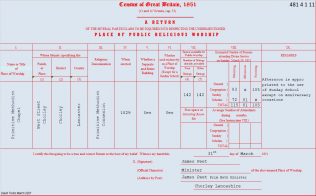 The new chapel measured 24′(w) x 42′(l).  Half of the chapel had paid-for pews; the other half free seats. The site had land sufficient for a school-room or cottage.

The return from Chorley Primitive Methodist chapel to the 1851 Census of Places of Public Religious worship locates it in West Street.  It held 284 worshippers, half of them in free seats. On Census Sunday, 83 people attended the morning service and 105 the evening one.

There was a Sunday school with 72 scholars in the morning and 81 in the afternoon. James Peet, the minister, completed the return.

The Christian Messenger of 1905 tells us that  at that time  there were two Primitive Methodist chapels in Chorley (although we do not know the relationship to the 1830 chapel).  The larger was in Cunliffe Street at the junction with George Street, with a membership of nearly  200 people. “Our people, for the most part, are of the working class, but we have also a few business people, and some of them are very closely associated with local parliaments. “