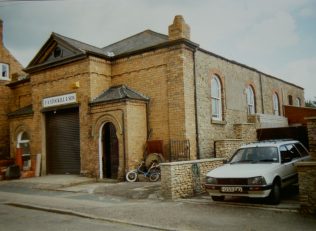 Snainton Primitive Methodist chapel in Station Road, was built in 1868. It was closed in the 1950s.  The former Wesleyan chapel further down Station Road continues to operate in April 2015.

At the time of Keith Guyler’s photograph in 1992 and on Google Street View in 2011 it is shown as a carpentry workshop run by FA Stockill & Son.