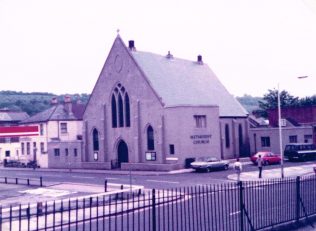 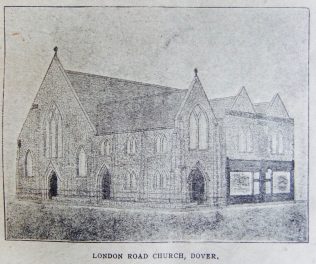 The first recorded Primitive Methodist meetings in Dover were in 1848 in a cow loft in Brook Street, Charlton.  A chapel was built in Peter Street in 1860.  After the building of the new church in London Road, this chapel had a variety of use before being demolished after the Second World War.

The foundation stone for the chapel in Keith Guyler’s photograph was laid on the 6th of May, 1901.  However, it took them a while. The Primitive Methodist magazine of 1898 notes that the Peter Street society had decided three years earlier that it was necessary to build a larger chapel and provide decent Sunday school accommodation, but they were concerned about the potential cost.

The chapel accommodated 600 people and was extended in 1928.  It was damaged in the Second World War and part of it had to be demolished.

At the time of the photograph the chapel was still in use as Buckland Methodist church.  On 31st August 2003, it was amalgamated with the Tower Hamlets Chapel and the United Reform Church to form the Beacon Centre, so called because of its location on the corner of London Road and Beaconsfield Avenue.