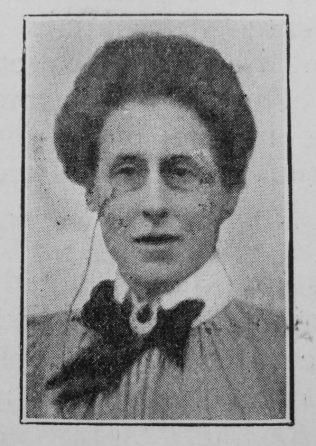 Transcription of Obituary in the Primitive Methodist Magazine by John Wilkinson

Nancy King, daughter of the late Mr. and Mrs. Alexander Glendenning, of Huddersfield, was born on August 16th, 1855. Her life from childhood onward was devoted to Primitive Methodism. As a teacher for twenty years only sickness kept her from her class. She highly prized the privilege of Christian fellowship, and never neglected the class meeting and other means of grace. She was a strenuous and skilful organiser and worker for bazaars, in which way she rendered magnificent service up to almost the last.

In July, 1894, she became the wife of Rev. G.W. King, to whom she proved a true helpmate. Wherever they laboured she entered vigorously into all her husband’s work and contributed towards his success in no small degree, at the same time endearing herself to those with whom she was brought into contact.

She was Secretary of the Bradford and Halifax District Ladies’ Orphanage Committee for five years, during which she carried out several efforts in the interest of the Alresford Home and Harrogate site. Her interest in all matters Connexional was real and keen. She was a familiar figure at District Meetings and Conferences.

But some five years ago her naturally robust constitution began to show signs of giving way, and fifteen months before the end she became very ill. Her sufferings were indescribably painful. But she bore her lot with a perfect patience and beautiful bravery that called forth the praise of ail.

Final deliverance came to our sister on April 2nd, 1907. Her remains were laid in the Schole Moor Cemetery, Bradford, amid many expressions of grief and affection.

On Sunday evening, April 7th, the writer conducted a largely attended and effective memorial service in the Central Hall, Bradford.

Nancy was born to parents Alexander, a woollen cloth merchant, and Sarah.