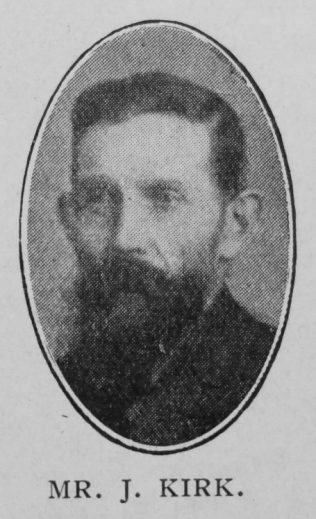 Transcription of obituary published in the Primitive Methodist Magazine by W.J.M.

Kiveton Park Circuit has lost a highly-respected steward by the passing, on February 15th, 1912, of Bro. John Wilson Kirk. Born at Bottesford, Leicestershire, in 1846, he spent the first part of his working life in farm service at Retford.

Removing to Kiveton Park forty-two years ago, he was one of the founders of our Church there, being a trustee from its beginning and a Sunday School teacher for over forty years. For many years a class leader, during the last twelve years he held the office of Circuit steward. His constancy, devotion, and loyalty were unfailing. Though living a mile and a half distant from the church, Bro. Kirk was in his place three times on the Sabbath.

He was interred in Todwick Churchyard by Rev. W. J. Musson, who also conducted an impressive memorial service on Feb. 25th.

John was born in 1846 at Bottesford, Leicestershire, to parents John Kirk, a common labourer (1851), and Mary Wilson.