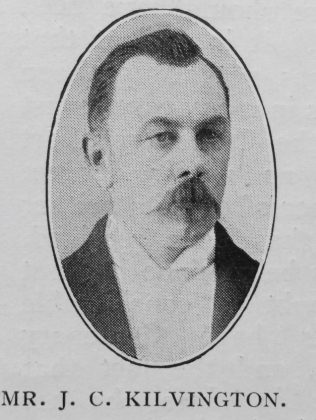 Transcription of obituary published in the Primitive Methodist Magazine by J.F.S.

Mr. J.C. Kilvington was born at Northallerton, March 23rd, 1862, and died July 24th, 1910. He has left behind a splendid record of service. Converted at thirteen, he removed to Carlisle, and in five years was secretary of the Sunday School,  discharging its duties with distinction until he became superintendent. Work among the young especially appealed to him, but he was an acceptable local preacher, and served his circuit with devotion.

A member of District Committee, he was a delegate to the Manchester Conference in 1897. Lovable and winsome, he made friends of all. Loyal to his church, he was a tower of strength in business courts and more than acceptable in the pulpit. His beautiful life ended with tragic suddenness. An operation for a throat affection on the Friday was followed by his passing on the Sunday evening. The funeral service was conducted by Rev. J.F. Sherman, assisted by Rev. J.G. Cushing.

He married Isabel Creighton (1860-1940) in the spring of 1884 at Carlisle, Cumberland. Census returns identify one child.