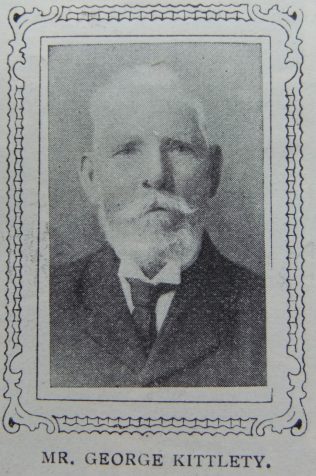 Mr. George Kittlety was born at Bradford-on-Avon, Wiltshire, in 1840, and when about eight years of age, he was taken to Dudley, in Worcestershire, where he first attended a Primitive Methodist Sunday school in George Street. Those were the days of child labour, and he commenced work at an early age in the coal and ironstone pits. He afterwards entered the coal pits at Tunstall, and was there at the time of the Connexional Jubilee. In 1861, he worked his way to London, and a year later being invited by a member of our Windsor Road Church (now Knights’ Hill), he attended the Lovefeast. Ere the service closed he rejoiced in a real and definite conversion. He entered immediately into service in the Sunday school and saw considerable success in this department. In 1864, he married Miss Mary Godfrey, who became to him a very godly and helpful partner. Amongst her possessions was a missionary box which she took in response to an appeal made by the Rev. J. Bendle in 1863, and though she has passed to the eternal rest Mr. Kittlety continues the good work for the Missionary cause, assisted by his late wife’s sister. It has been opened every year for forty-five years, and is usually the highest in the Forest Hill Circuit. When our cause was first established in Hamilton Road Mr. Kittlety was made Society Steward, and subsequently became also Sunday School Superintendent. As other workers joined he relinquished these offices, and was appointed Class leader and teacher of the Infants’ Class, which latter office he was obliged, through ill-health, to resign in 1893. Mr. Kittlety is a witness to the sustaining power of the grace of God and his consistent life is an inspiration to those who know Him best.

George was born in 1840 at Bradford on Avon, Wiltshire, to parents James and Maria. James was a labourer.

George died in early 1915 in the Lambeth Registration District, London.