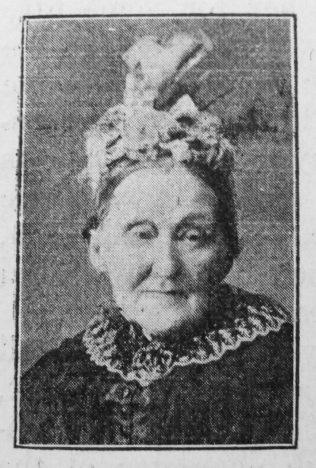 Transcription of Obituary in the Primitive Methodist Magazine by Robert Reeve

“Bethel” Primitive Methodist Church has sustained a severe loss in the departure of Mrs. Knape, who was one of its oldest members. She was born at Low Moor, near Clitheroe, on April 16th, 1824. Her early years were spent In surroundings which characterised the earliest days of our denomination, and the days of her early womanhood brought her into active sympathy and service with the founders of our Connexion. One of the events of childhood days, about which she often spoke, was the remembrance of her father walking from Clitheroe to Burnley to preach, taking his food with him because friends were few and homes were scanty.

Bourne and Clowes were personally known to her, and shared the hospitality of her father’s home, and many of the first and second generation of Primitive Methodist preachers were her personal friends. Herod, Kidd, Macpherson, Garner, Inman, were names she frequently mentioned. She shared with them the hardships and derision bestowed upon the “Ranters” – as they were sometimes called – but she shared with them the joy of turning many to righteousness, saw them lifted from the “mire” of transgression, and “the clay” of a low sense life, to honour and influence, so that their children and grandchildren inherit position, affluence, and power directly traceable to the conversion of their fathers through Primitive Methodist agencies. Removing from Clitheroe, she resided at Accrington and Haslingden, and in both places she identified herself with our people and rendered excellent service. On her marriage in 1860, she removed to Burnley, and for forty-five years maintained an unbroken connection with “Bethel” Society. Her strong sense of duty, her uniform consistency and devotion, her ripe experience, her constant and generous support of the institutions of the Church, endeared her to a large circle of friends. Her last public effort in the Church was opening a sale of work at ‘‘Bethel” on December 24th, 1904, her son presiding for her, and great was the pleasure caused them by her vigorous utterances, and her unabated interest in all the proceeding of the day. After being confined to her room for one short week, she passed peacefully and calmly away, her faith in God undiminished, and her confidence concerning the future bright and glorious. She died February 2nd, 1905, in her eighty-first year.

A large number of friends attended the funeral service in “Bethel,” which was conducted by the Circuit ministers, and she now lies interred in the Burnley Cemetery, awaiting the resurrection of the just.

Sarah was married to John Knape, a coach builder (1827-1890). I have not been able to identify the marriage record. If the date given in the obituary is correct, then this was a second marriage for John, and Sarah brought up two step children; John (1852-1923) and Sarah (b abt1858). She had one daughter of her own.