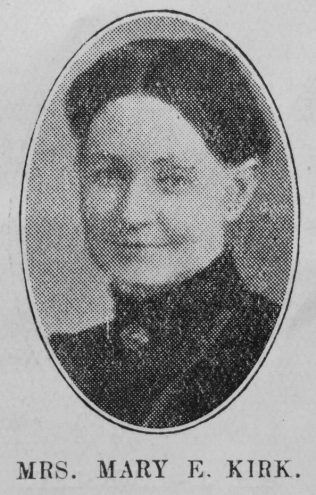 Transcription of Obituary published in the Primitive Methodist Magazine by B. Arnfield

Born at Hemsworth, May 4th, 1849, her family removed to Doncaster a few years after. After a period of domestic service in the families of Sir Joseph Copley and Sir William Cooke she was married to Mr. John Wilson Kirk (who for some years has been the Kiveton Park Circuit Steward), in Oct., 1871. Before marriage she had been a communicant of the Anglican Church, but immediately after, during a cottage service at Kiveton Park, conducted by the Rev. James Shaw, she made a fresh and complete consecration, and from that time has been a consistent member and devoted worker of our Church.

Whilst specially interested in the welfare of Kiveton Park Church and Circuit, her connexional outlook and sympathy have been broad and real. During the last ten years she and her husband have attended the Conferences, and had joyfully contemplated being present at Southport this year.

It is gratifying to reflect that she was spared to see her large family grown up. Of eleven children, one son and eight daughters are still living.

From the outset of their married life they established the family altar, and both ministers and laymen have been considerately and generously entertained in the home.

The high respect in which she was held by the community generally was evidenced by the large company present at the funeral, which took place at Todwick Parish Church on Tuesday, March 2nd, many having to stand in the back aisle and porch. By permission of the rector, the service in the church and at the grave was conducted by the Rev. B. Arnfield, assisted by the Rev. H. Jones, the Kiveton Park Choir occupying the stalls in the chancel and leading the singing.

On Sunday, March 7th, an “In Memoriam” service was conducted in the Kiveton Park Chapel by the Rev. B. Arnfield, at which the choir gave suitable selections.