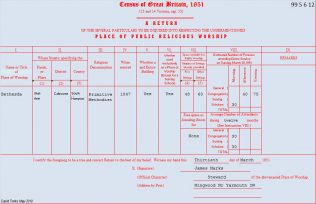 However, the 1851 Religious Census for Hampshire makes reference to Bethesda Primitive Methodist Chapel at Shalfleet – with a note in the transcribed book that the chapel was probably in the hamlet of Newbridge. This chapel was built in 1847, and the steward was James Marks of Ningwood, nr Yarmouth. Average attendance was said to be 80 with 30 scholars.

Note: Most of the hamlet of Newbridge lies within the Parish of Shalfleet.

The Women’s Institute Isle of Wight Village Book website records: “In 1856 the Primitive Methodists put up a chapel, which today is the Mission Church, with Church of England services held once a month by the Vicar of Shalfleet.”

The 1863 Primitive Methodist magazine (page 367) contains an account by W Dinnick of the opening of a new chapel in Newbridge, Newport:

“Newbridge, Newport, Isle of Wight. —About two years since our brethren missioned this neighbourhood, and God has owned and blessed our labours to the conversion of many precious souls. To his name be the glory

On the following Monday a public tea was provided, and attended by a large assembly from the surrounding villages and towns. Afterwards a public meeting was held, which gave great satisfaction ; it was presided over by our friend Mr. Joseph Bash, Circuit Steward, and addressed by brothers Moorey, Dennes, Cheverton, Cowdry, Alderslade, Connel, Baitson, and the writer.

On Sunday, January 25th, the opening services were brought to a close by Mr. D. Dennes. For the prosperity that God is favouring us with as a Circuit, and for the kindness of our esteemed friend Mr. Woodford, we tender our sincere thanks; and taking courage, we hope and believe that brighter days will yet appear. W. Dinnick.”