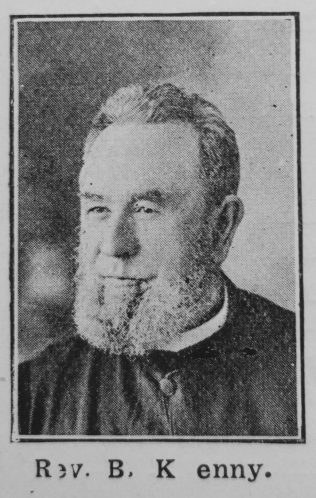 Transcription of Obituary in the Primitive Methodist Magazine by Geo. James

Mr. Kenny was a native of Ireland, and resided with his parents at Portadown, till he was near 20 years of age, the family belonged to the Roman Catholic Church. He remained in the Church of his father till he was near 20 years of age, when he went to England, and for a time resided at Louth. He there formed an acquaintance with a young man who was a zealous Primitive Methodist, and his new friend invited him to the P.M. Church. A good work at that time was going on under the labours of the Rev. Parkinson Milson. Mr. Milson was the preacher on the Sabbath evening Mr. Kenny attended, it was the first Methodist service our friend had ever attended. The service was so plain and homely, that it contrasted strongly with the pomp and show of the Church to which he had been accustomed. But in that first Protestant service he was convinced of his state as a sinner. He was broken down into a state of penitence, and commenced to pray for pardon. Eventually, he believed in Christ as the only and all-sufficient Saviour. He at once joined the Church, and continued a loyal Primitive Metliodist, until Australian Methodist Union took place. After due preparation he entered the Ministry, and laboured on the Portadown and Glasgow stations with great success. In the year 1864, ministers being wanted in this State, he was asked by the Rev. Moses Lupton,  to come to our assistance; he complied with the request, and with his wife reached Sydney, July 7th, 1864. His first station was Parramatta. He received a public welcome to his new station on August 8th, 1864. He entered very earnestly into his work; he preached in the open air as well as in the church. Every Sunday afternoon and almost every Sabbath evening witnessed conversions. Some of those who were led to God by his ministry, have long since joined the Church Triumphant, some are still with us.

After leaving Parramatta, he laboured on the following stations, with great acceptance and encouraging success, viz., Camden, Goulburn, Bowral, Wallsend, Lithgow, Parramatta (a second term), Sydney first, Waterloo and Granville. On all his stations he was successful in the conversion of sinners. Hundreds revere his memory; he was greatly beloved and always welcome in the homes of his people, his preaching was plain, pointed, and at times very powerful. He made no attempt to play the orator; his view of the Christian ministry was too lofty for that. He was sound in the faith, a firm believer in the doctrines taught by the Methodist Church. He endeavoured to rule well his own household, and his family consisting of three sons and two daughters are all connected with our Church. At the Conference of 1900, he was compelled to seek superannuation, through failing health. It was hoped that rest, and relief from the responsibility of superintending a circuit would restore his health. But this was not to be. About three months ago his affliction assumed a very serious form. Several doctors met and consulted, but they held out no hope of his recovery, and his dear wife and family had to prepare themselves for the parting. His strength gradually declined, and at last the summons to his home on high was given. The writer of these lines visited him several times during his sickness, and always found him resting upon Christ. He knew he was leaving us, but repeatedly said, “All is right.” He was faithful unto death, and has now the crown of life. He suffered much, but all his sufferings are now passed. When he could no longer speak, his hand was lifted as a token of triumph. “Blessed are the dead which die in the Lord. They rest from their labours.”

He was President of the Australian Primitive Methodist Conference in 1885.

Bernard died on 20 May 1902 at Granville, New South Wales, Australia.