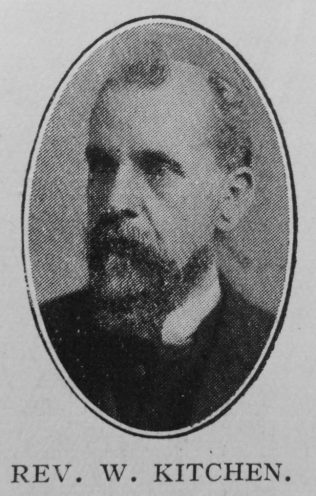 Transcription of obituary published in the Primitive Methodist Magazine by H. Fox

After only a few days’ illness, the Rev. W. Kitchen died at Morecambe on the 20th June, 1913, and was interred in the Norton Cemetery, Sheffield, on Monday, June 23rd. Sixty-nine years of age, his passing closes a life which, by reason of its unmeasured devotion to the highest ideals of the ministerial office, has been of immense service to our Church. As the result of powerful Sunday School influence, he decided for Christ in his twelfth year, and straitway applied himself to the interests of the Church.

The way to wider service was opened to him two years later when he received a note from the Silsden Circuit authorising him to accompany Mr. W. Fletcher to his appointments. As a local preacher he was highly appreciated and much in demand. He was one of the first batch of students to go to Elmfield for ministerial training. After a successful year there, the Conference of 1866 appointed him to his first station, Luton.

For thirty-nine years he travelled in various parts of the country and frequently on circuits involving much physical labour. On entering a new sphere his first line of action was to gather the young people around him, and to assure them of his desire to be their intellectual and spiritual guide. In this direction he had conspicuous success. He was on the Malton Circuit during a critical period in its history. He faced the situation with determination and hope, and after three years of hard toil left the station in a most flourishing condition. A testimony to hand states that they never had a minister who rendered them better service.

During his term in Maidstone a ravaging typhoid epidemic broke out. He so devoted himself to the service of the suffering and distressed that he afterwards received grateful public acknowledgment. On all his circuits he did lasting work; and in a brief autobiographical note he refers to having frequently witnessed conversions. Though never filling any of the administrative offices of the Connexion, his attention to administrative detail in circuit life had much to do with the strength of his ministry.

All through life he was a diligent student; he was specially interested in the bearing of scientific research on theological thought. His knowledge of the Scriptures was exceptionally complete. Considerable portions he had committed to memory. Accuracy of Biblical quotation both by himself and others was to him a matter of first importance.

After a good day’s work he superannuated in 1905, and took up residence in Sheffield. All who have known him unite in their testimony to his kindly disposition, unobtrusive manner, and practical religious worth.

Rev. J.S. Buckley writes: “I owe more to him of mental and moral value than to any other man with whom I came in contact. Seldom did he speak of his inner religious experiences, but when he did there was the hallmark of sincerity on his utterances.” For his life and work we thank God, and now think of him as having entered into the reward of his labours. A memorial service was conducted by Rev. Henry Fox in John Street Church, Sheffield, on Sunday evening, June 29th.

Before entering the ministry William worked as nail maker (1861).