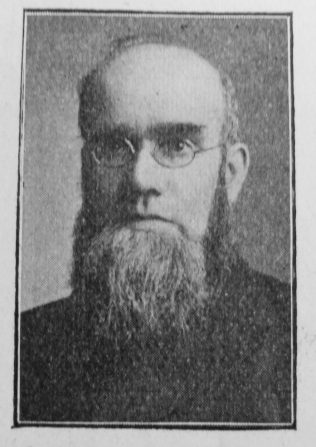 Transcription of Obituary in the Primitive Methodist Magazine by Thomas Davies

When about eleven years of age, young Neilson, by appropriating faith, accepted Christ as his personal Saviour in the Primitive Methodist Mission Room, Turner Street, Glasgow. He was an accredited local preacher at seventeen years of age. In 1872 he was sent by the Missionary Committee to Wolverhampton. Here and then our life-long friendship was formed. Few young men have more fully entered into the Redeemers agony to save, or assumed the ministerial vocation with a purer and more ardent desire to serve Jesus Christ and men. Even then his pulpit exercises were charged with freshness and vigour of thought, holy fragrance, and spiritual power. His pastoral visitation when in Wolverhampton is to-day a precious memory. His next appointment was to Tollcross, Glasgow, from whence he came. He married Miriam, youngest daughter of Mr. William Hardy, a well known and deservedly esteemed Primitive Methodist, under whose hospitable roof scores of the early preachers found refreshment and rest. Mrs. Neilson consistently and faithfully shared with her husband the duties, joys, sorrows, and triumphs of ministerial life.

With growing acceptability and much usefulness he discharged the varied and manifold duties of the true minister, on the Belfast, Dublin, Belfast a second time, Clithero, Blackburn and Walkden stations.

When in Dublin he eagerly utilised the opportunities the University offered; subsequently taking his B.A., M.A., and B.D. degrees. These scholastic attainments he wore with becoming dignity.

Under irritation and annoyance he tendered his resignation of the Primitive Methodist ministry, joined the English Presbyterian Church, became a recognised minister, laboured for a short time in mission work, and was offered the pastorate of an influential church; but feeling there was no place like home, mainly through the influence of the venerable James Macpherson and the Rev. D.T. Maylott, Mr. Neilson sought and obtained reunion with the church of his early choice. For more than thirteen years Manchester 2nd and Manchester 6th had the honour and profit of his self-denying ministry. Here is an extract from a letter from the Great Western Street Church, evidently written by Professor A.S. Peake, Messrs. J. and T. Sutcliffe and J. Longden, and signed by the circuit officials: “We were bound to your husband by close and affectionate ties, for he had been to us a most faithful and zealous pastor. We had been often strengthened and uplifted by his sermons, in which we discerned not simply the fruit of long and earnest study, but of warm emotion and firmly held conviction. In the other departments of our Church life he constantly displayed the same devotion, guiding them all that they might attain the highest and truest success. We remember how he took an individual interest in us and we can never forget how tender he was, when we were called to endure pain or bereavement. We have lost not only an honoured minister, but a dear friend. He cherished us in a large and sympathetic heart, pleaded for us at the throne of grace, and sought to deepen our spiritual life.”

For several years Mr. Neilson was a valuable member of the Moss Side School Board, and a part of the period acted as its Vice-Chairman.

At the time of his decease he was a member of the Education Committee, and General Secretary to the Probationers’ Examining Committee. For nine years he acted as Assistant Classical Tutor at the Alexandra College, Manchester, with the cordial appreciation and acknowledged profit of the students.

The Rev. W.G. Softly writes: “I shall cherish his memory for the tremendous influence he had upon me while under his tuition in the College, and for the kindly opportunity of knowing one so full of generous instincts and noble purposes, and so successful in inspiring others with his genial enthusiasm.” This is one of many testimonies to his work and worth as a tutor. He was a born teacher, yet how hard he worked to secure what he believed to be the necessary equipment and qualification for the duty he loved so well!

As a student he was methodical, painstaking, and persistent. He wrote abstracts of most of the books he read. His books are so marked that they testify to his thoroughness and mastery of detail. As a preacher he presented the truth in fresh and living forms. Whilst his sermons revealed inward loyalty to truth and the fine, pure temper of sincerity they were pregnant with evangelical fervour and spiritual unction. His administrative ability, management of men, and self control in some measure account for the material prosperity of the stations on which he laboured. From the commencement to the close of his ministry he realised that one of the finest fields for service for a sagacious and devout minister was pastoral visitation. His wide human sympathies quickened and intensified by the grace of God made him a comforting and inspiring influence in the homes of the people.

Although his duties were manifold and absorbing he gave time to pastoral work. He had scant courtesy and less sympathy with those ministers who were too busy to pay pastoral visits. Our brother was an Endeavourer before Christian Endeavour was recognised. He loved the children committed to his charge and gave to them of his best. As a friend he was genial, constant, candid and reliable. Because he was human he had his faults, but in him they were fewer and less glaring than in most of us. He was no temporiser nor trimmer, had an intense hatred of shams and an innate love of justice. How keenly he felt the treachery of trusted friendships and the little acts of duplicity resorted to by those from whom nobler things were required! With lofty scorn he abhorred those ever ready to pander to wealth and social distinctions. He was a successful man, and as a successful man he suffered from the poisoned darts of envy and jealousy. But most of all, and before everything else, he was deeply and profoundly religious. Christ was paramount and supreme in his affections and aims, other persons and interests subservient and subordinate. The Connexional Editor, Rev. H. Yooll, wrote:- “Very few brethren stood more highly in my esteem and affection, and I feel that my life is poorer for his absence. His qualities of mind and heart greatly endeared him to us all. His rare, deep sympathies and geniality, his fine culture, his spiritual fervour and his abounding zeal as a pastor beloved render his loss to us as a church greater than words can describe. I was proud of his friendship and ever cherished it as a rich possession.”

Mr. Neilson had been in failing health for some time, but there was no apprehension that the end of his able and multifarious life was so near. It came with startling suddenness on October 1st, while on it visit to his relatives at Crewe. He peacefully passed away in his sleep in the fifty-fourth year of his age. He walked with God and was not, for God took him. The interment took place on October 4th, in the Crewe Cemetery, when many ministers, students, laymen, friends and admirers joined in a last tribute of respect to the memory of one greatly beloved. A singularly impressive and helpful memorial service took place at the Heath Street Primitive Methodist Church, at which three Presidents of the Conference, Revs. J. Hallam, J. Travis and T.H. Hunt, Principal Johnson, Revs. W. Barker and J. Yearsly took part. At the graveside the Rev. G.P. Clarke read the committal service, Rev. J.H. Taylor, M.A., offered prayer, Rev. W. Carr announced a hymn and the Rev. F.N. Shimmin gave a touching address. Memorial services were conducted in Moss Lane Church by the Rev. W. Barker, and in the Great Western Street Church by the Rev. F.N. Shimmin. Our brother’s life was a beautiful embodiment and expression of the words, “Giving all diligence, add to your faith manliness; and to manliness, knowledge; and to knowledge, temperance; and to temperance, patience; and to patience, godliness; and to godliness, brotherly kindness; and to brotherly kindness, charity.” Many prayers are offered that the bereaved widow and the two devoted daughters may be always comforted and strengthened by Him who is the supreme solace and strength of stricken souls.

Daniel was born on 30 January 1850 at Lanark, Scotland to parents Matthew, a weaver in a cotton factory, and Christina.

The 1861 census describes Daniel as a printer’s boy, and in 1871 he is described as a draper and Methodist local preacher.

He married Miriam Hardy (abt1846-1926) in the summer of 1876 at Wolverhampton, Staffordshire. Census returns identify two of five children.