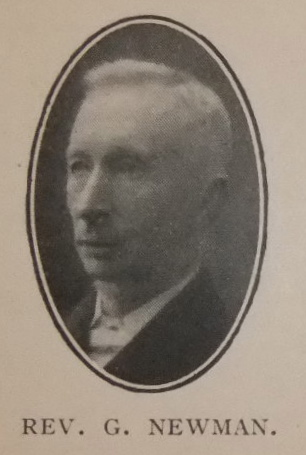 George was born in 1844 at Stafford to parents John and Jane. John was a shoemaker. Both parents were local preachers and class leaders. The family home was regarded as a home for visiting ministers and preachers.

Geoff was fortunate to receive a grammar school education. He became a Primitive Methodist member at the age of fourteen, a local preacher at sixteen and travelling preacher at twenty.

During his time in Belfast, George was associated with the Melbourne Street Church. George renovated the chapel, dealt with the debt and left amidst signs of prosperity.

In his last appointment at Sheffield George undertook a significant building scheme. Whilst successful the strain brought on a nervous breakdown necessitating his superannuation.

As a preacher he was no flash in the pan, no flying meteor, but thoughtful, solid and instructive. His sermons were carefully prepared, intelligently worked out, logically arranged and forcibly applied. His style was flowing and tended toward what would be sometimes called flowery. He made preaching and sermonising his chief study.