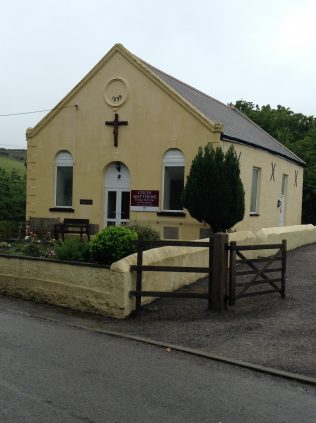 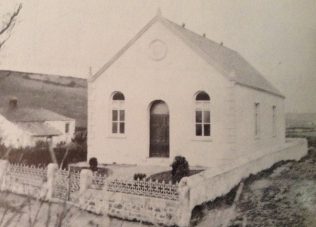 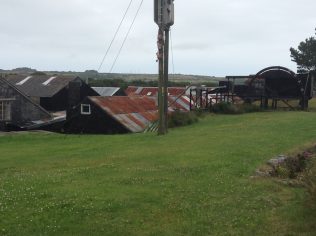 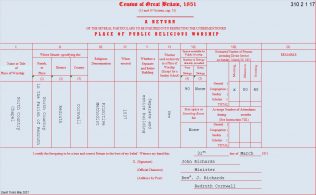 zoom
North Country: return from the Primitive Methodist chapel to the 1851 Census of Places of Public Religious worship. Return no: 310 2 1 17
transcribed by David Tonks 2021

North Country is a hamlet, outside Redruth, Cornwall. This small community had at one time three chapels; Primitive Methodist, Wesleyan (still in being) and Wesleyan Association (now Chapel Cottage). The Redruth and Camborne area is heavily populated by several versions of Methodism which in addition to the above also included Bible Christian (nearest at Radnor ) UMFC, United Reformed, Methodist New Connexion and so on.

The Primitive Methodist Chapel sits in Gilbert’s Coombe at Lower North Country, a valley leading from Tolgus, Redruth from the numerous tin and copper mines, down to the former fishing and shipping village of Portreath. This valley had a river (now a small stream) leading to Portreath and was full of calcators and processing sites,used for the processing and recovery of tin (tin streaming) along its length. It was one of several in the area, with others in adjoining valleys, such was the value of tin that even the waste was reprocessed, with one streaming works on the beach at Portreath to catch the last of the tin before it was lost into the sea. Redruth and Camborne was a very rich mining area for tin and copper, with much of its products being shipped out via Portreath or Devron (on the north coast near Falmouth) to South Wales (Swansea and Neath in particular), with coal being shipped back the other way. It would seem many families have connections in both Cornwall and Wales as a result. The area was also heavily reliant on agriculture. The census for the area show many worked in agriculture, tin streaming or domestic service in a number of the large or well to do houses in the area.

Research shows that a building at Pauls Stamps (where rock was crushed at the start of processing) was bought in 1838 for £31.  The stamps were behind that the left of the present chapel. Within four years they were in debt and had to pay up or the chapel would be sold. This suggests that the premises were leasehold and finances would be a reoccurring problem. They were probably influenced by other PM Chapels and classes in the area (such as Illogan Broadlane, Redruth, Plain an Gwarry also Redruth, Camborne (Trevenson street) and Tuckingmill. The growth of Methodist church is described in the Broadlane PM article, with the epicentre in Tuckingmill, Camborne.  All within a few miles of each other and often, as said, neighbours to other chapels, some bigger and richer than others.

In 1860 would seem that alterations took place, causing them to be further in debt by £60. The Trustees at the time were all residents of North Country; Saml. JOHNS, Joseph HOCKING, Rich.WHITFORD, Jas.GROSE, John TRVILYON, John EDDY and John JOHNS (all miners); John NICHOLLS (blacksmith), G HICKS (mine agent of North Country) and a John HOSKING (mine agent of Redruth).The financial situation had not improved in 1864 when the Sunday School (an adjoining wooden building where the present chapel stands) had not paid its rent and was locked out! This led to arguments as to whether the society be controlled by trustees or be part of the connexianal.

It would seem then, the original lease, assigned it over to a Thomas Allen, who agreed to pay  for alterations and that it would be assigned in to the PM connexion (see1. For meaning). This led to the congregation being determined not to be connexianal, and so when plans were drawn up for a trust, sittings were given up, members left (15 reported) and quarrels. PROBERT notes one member stating later, that “if we didn’t secure the chapel when we did, we should probably (been) turned out”.

New beginnings but defiant to the end.

In 1897 a new trust was formed, and in 1899 the old wooden Sunday School was pulled down, and on the 31st August 1899 foundations stones laid for the new (our present chapel).The Society continued for some years after the Methodist Union, and was part of the Methodist circuit, but numbers fell with preachers sometimes finding no congregation.In 1936 it left the Circuit and again became independent with numbers initially up, but theses soon fell.For a number of years it maintained a Sunday School, and the chapel open for local events such as harvest Festivals.

The chapel is now a working Chapel of Rest for a local undertaker (which I have known it to be for at least 25 years). Though there is parking to the side, please note this is for the Undertaker. Also there are small modern memorials in front of the chapel, frequently visited. Please be respectful. Also the field behind belongs to the local Archery club, who also have access nearby and don’t like the gateway being blocked.A little further on down the road is the Cornwall Gold tourist attraction (walkable to the Chapel) along with The Track a local BMX family cycle park. Adjacent to these (access via the Cornwall Gold attraction) is Tolgus Tin Streaming Mill, the last of the streaming works, now a small museum which will give you a flavour of the type of mills that worked this valley.

ThomasSHAW  Methodism in Illogan 1743-1958
(ILLOGAN is a major village as short distance away with connections to Portreath).