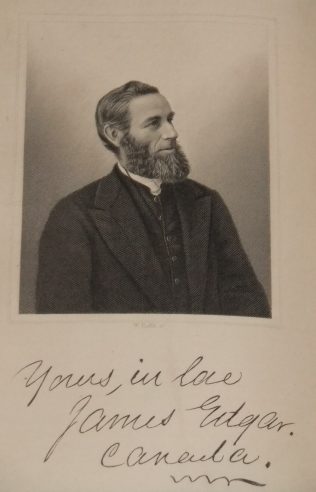 James was born in Canada of Irish parents.

Antliff writes; ‘ The Rev. James Edgar, M.D., in the early years of his ministry, which commenced in 1848, was a mighty preacher at camp-meetings. He was a man of refined tastes and gentle disposition. After his superannuation he practised as a physician in Toronto, and was a blessing in the homes of many, especially the poor, to whom he became “the beloved physician.”’

Kendall describes James as ‘a man nearly all soul and sympathy’. He superannuated in 1880.

H B Kendall, Origin and History of the PM Church, vol2, p451