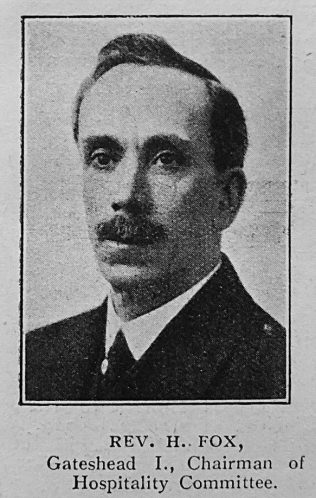 HENRY FOX: born at Hull in 1870. He began his ministry in the Primitive Methodist Church in 1895, after training at Hartley College. It is not too much to speak of him as scholar, saint, and servant of all. In his pulpit utterances, with a clear, ringing voice, he proclaimed the truth of God in Christ with the certainty that comes of conviction confirmed by earnest study. His was the finest type of evangelism, in which the emotions, intellect, and will were perfectly blended.

His character was such that his own suffering, through the early bereavement he sustained in the death of his wife, did not destroy his sparkling humour or remove the twinkle from his eyes, which all who knew him will remember as long as they live. In his pastoral work, he excelled because of a rich sympathy with, and deep understanding of, human nature. He was most careful never to hurt but always to help his fellows, because he was so completely a Christian gentleman. Nothing was too much trouble for him to do; nothing was too small to have his attention. Shakespeare’s words, put into the mouth of Mark Antony with reference to Brutus, are most applicable to Henry Fox, ‘His life was gentle and the elements so mix’d in him that Nature might stand up and say to all the world “This was a man”.’

After retirement he assisted the Chairman of the Derby District at the Alfreton ‘Watchorn’ Memorial Church before joining his daughter and son-in-law in their home, where he peacefully passed away on 15th November 1948.

Henry was born on 4 November 1870 at Hull, Yorkshire, to parents William, an engine driver at oil mill, and Ann.

He married Florence Ann Dosser (1878-1911) in the spring of 1900 at Driffield, Yorkshire. Census returns identify one child.