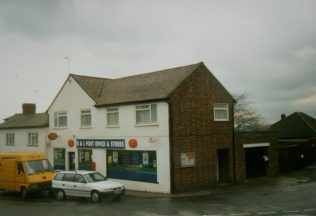 Keith Guyler identifies the remains of Bishop’s Itchington Primitive Methodist chapel as what was then (in 2000) the village Post Office & Store. The notes with Keith Guyler’s picture say that the chapel was opened in 1856 and was closed by 1940.

“Bishop’s Itchington, Leamington Circuit. — After much prayer, anxiety, and toil, a beautiful brick chapel, 21 feet by 18 feet, and 14 feet from the floor to the wall plate, covered with countess slate, has been built. The cost is £120, towards which the sum of £45 has been raised. The opening services were conducted by Messrs. Piatt, Palmer, and Brazier. The sermons were instructive, the congregations encouraging, and we hope good was done.”

On the 1885-7 Ordnance Survey 1:2,500 map a Primitive Methodist chapel is located somewhere to the east of the end of Chapel Street, although the precise location is not clear. Later maps locate it where the Post Office stands.

Anne Langley has provided further information about the Bishop’s Itchington society. “Primitive Methodist meetings are first mentioned in the Leamington circuit records in 1849, but there is no record in the religious census of 1851. A chapel for 100 people was built of brick in Poplar Rd in 1859 at a cost of £246; the dimensions were 21’ X 18’ & 14’ high and the inscription stone cost 13s. Accounts survive from 1859-60 that includes the names of donors (probably the initial trustees). Money was spent on whitewashing, pulpit skonces [sic], spouting, grates, a glazier, sawyer, blacksmith and carter. There was income from an opening collection, tea meetings and later on anniversary sermons and seat rents.

The average attendance in 1900 was 70. There was a Band of Hope group, and a Sunday School, with 44 children attending in 1895. The chapel appears on OS maps from the 1st edition onwards (1880s-1950s) and in Warwickshire trade directories from 1874-1932. The site is now a Shop and Post Office, but little if anything of the original building remains visible.