You are here: HomenextChapelsnextWarwickshirenextStratford upon Avon Primitive Methodist chapel 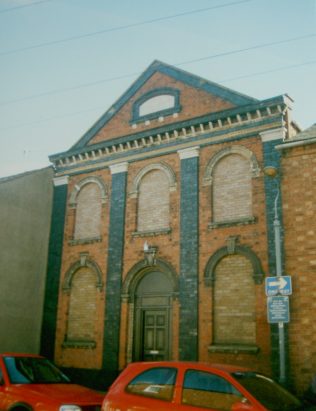 The earliest surviving records of the meetings of the Primitive Methodists in Stratford-upon-Avon date from 1852. Keith Guyler’s notes with his photograph say “Guild St end of alleyway from Library to Shakespeare Trust property.  Demolished”

A chapel was erected in Great William Street in 1866 and a circuit developed in the surrounding villages.  At the time of Keith Guyler’s photograph in 2000 he comments that it is used by the Mormons.  On Google Street View in August 2014 it is the Masonic Hall.  It appears as it did in the photograph with the windows bricked up.  I wonder whether the Mormons comment is a transcription error?

Anne Langley tells us more about the Stratford upon Avon society:

“A Primitive Methodist Chapel was built in Great William Street in 1835; in that year a formal complaint was made against five people from a mob who assaulted Thomas Chalcroft, prevented the door being unlocked and threw stones at the chapel on a Sunday evening. The religious census records this chapel as having 130 sittings and three services on Sunday with attendances of up to 70 plus a Sunday school attended by 25 children; the minister James Symonds lived in Stratford.

A large Primitive Methodist chapel in 3-bay classical style was built in 1865-6 for £365 in Great William Street (probably on the same site) by local builders James & George Callaway overseen by local architect Thomas Taylor Allen. It was made of two contrasting coloured bricks (red and blue) with a slate roof. A plaque above the entrance records ‘PRIMITIVE METHODIST CHAPEL ERECTED 1866’ and a foundation stone ‘THIS STONE WAS LAID MARCH 30TH 1866’.

A chapel is recorded in Warwickshire trade directories from 1850-1932 and on 1st and 2nd edition OS maps (1880s-1900s); it was still recorded as a Methodist Church on OS maps of the 1950s. It was part of the Stratford circuit and operated a Sunday School (for which registers of teachers and pupils survive). It continued to operate independently until 1939 when it rejoined the Wesleyan Methodists. The building still survives in reasonable condition (though with scaffolding currently on the front) and is used by the Freemasons.