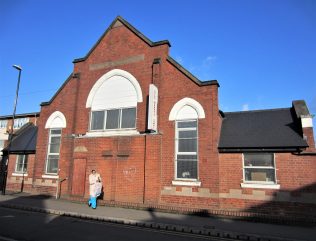 Google Street View in July 2016 shows that in Cross Street, just off Stoney Stanton Road, stands the Shree Mandhata Samaj.  The building bears the date 1907 and the wording Primitive Methodist Schools, together with a number of foundation stones. The chapel itself was on what is now the car park at the junction of the two roads.

Paradise (also known as Bethesda and later Edg(e)wick) Primitive Methodist Chapel was built in 1828 to seat 296 people.  In 1851 the religious census showed an average congregation of 110, with 130 Sunday-school pupils.

The original chapel was replaced in 1857. The ceiling was very low and the walls too weak to be raised so the original chapel could not readily be enlarged; instead it met the need for a place for the Sunday School to meet.  The new chapel accommodated 350 people and had a gallery at one end.

There is an account by John Thomas of the opening on January 11th 1857 in the Primitive Methodist magazine of March 1857. Sermons at the opening services and tea meetings were preached by J Moxon of Market Bosworth and Miss Buck of Leicester, Mr Stafford (who organised much of the fundraising), Mr Thomas and assorted ministers of other denominations.

By 1940, the chapel had 320 sittings and thirteen additional rooms.  In 1950, Paradise chapel amalgamated with the Broad Street congregation (where the Chapel had been destroyed by bombing) to form Edgewick Methodist chapel.