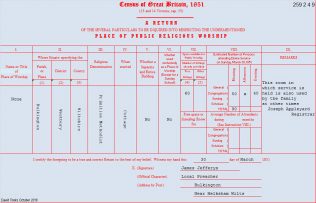 The Lower Primitive Methodist Chapel at Bulkington was built in Bedworth Road (now Bedworth Close) in 1849 and appears in the 1851 religious census: there were sittings for 112 and an attendance of 100 at the evening service; they ran a Sunday School with 38 children attending. The minister was Joseph Harris (who also served Collycroft nearby).

In 1852-3 they were holding afternoon and evening services on Sundays plus an evening one on Wednesdays. Preacher T. Masters lived in Bulkington; they were to hold two salvation meetings in October and a missionary meeting in November. There was a complaint about an unlicensed burial at the Primitive Methodist Chapel in Bulkington in 1855.

The chapel appears on the 1st and 2nd edition OS maps (1880s-1900s) and in Warwickshire trade directories from 1874 to 1932. It was part of the Coventry circuit and did not join the Wesleyan Methodists until 1945. The chapel had become the local Methodist Church by the 1950s but was later sold and houses have been built on the site.