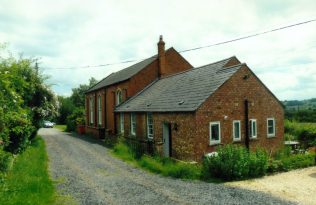 No records have come to light about the beginnings of Primitive Methodism in Brailes in Warwickshire. The Rev. Joseph Preston “missioned” Chacombe, near Banbury, about 1830 and the work prospered and spread quickly into the surrounding villages in North Oxfordshire. The Primitive Methodists seem to have reached Brailes about 1840 and a Society was formed which met in a house at Lower Brailes. The first 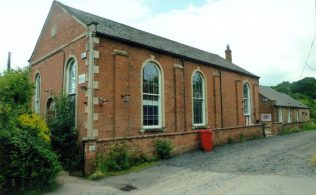 baby from Brailes to be baptized in the Banbury Primitive Methodist Circuit was Mary, a daughter of Edward and Ann Simms, Plush Weaver in 1842. Edward was also a Local Preacher.

Primitive Methodism became well established in the village thanks to the work of Kenric Kench, an Agricultural Labourer who was born in Brailes in 1808. When he was a young man, he got into bad company and later described himself as a “drinking, swearing, profligate fellow.” It was not until he was 30 that he became a Christian, and it happened after he attended a meeting at the Wesleyan Chapel in Tysoe about 4 miles distance. The day after the meeting he was walking to work when, as he later wrote “suddenly I saw the way of salvation by faith and obtained the pearl of great price.” When the Primitive Methodists arrived in Brailes, nine months later, he linked himself with them and soon became a leader and a Local Preacher. He did much to establish the Primitive Methodist Society in Brailes and was later appointed as the Town Missionary in Banbury where he gained the esteem and affection of the Banbury people. When he died in 1874 the Superintendent Minister of the Banbury Primitive Methodist Circuit, Rev Henry Yeates, described him as “our sainted Kench.”

By 1848 the numbers had grown so much that the Society moved into a new building on College Green in Upper Brailes  and this was used as a chapel. It had “36 free and 50 other sittings.” Kenric Kench was the Society Steward. The Ecclesiastical Census taken on the 30th March 1851recorded that divine worship at Brailes Primitive Methodist Chapel was attended by 70 in the afternoon and 80 in the evening. There were also about a dozen children at both services. The Census also recorded that the average Sunday attendance over the previous 12 months was 100. It is worth noting that the Circuit Statistics Book records that there were only 19 members at that time. Perhaps the church was reluctant to make new members too easily or were the people unwilling to commit themselves to the responsibilities of church membership. At any rate the church was growing and a report in “The Primitive Methodist Magazine in 1857 described the work at Brailes thus –“But how our hearts have been gladdened in seeing the grace of God at Brailes. Not confining all the religious services to the chapel, cottage prayer-meetings have been held in various parts of the parish, shaking the neighbourhood, and taking hold of sinners; and first one and then another have been emancipated from the thraldom of sin and Satan and brought into the liberty of the Gospel.”

The 1851 Census showed that the existing chapel was too small for the growing congregation, but the local landowners were unsympathetic to the needs of the Primitive Methodists. The Circuit Quarterly Meeting of July 1857 asked the Rev H Yeates to hold a Leaders’ Meeting at Brailes to discuss “the unhappy matter with their society.” If this was about their difficulty in obtaining a building plot the outcome was that 6 months later the minister, himself, was asked by the Circuit Quarterly Meeting to negotiate with local landowners for a plot of land on which to build a chapel – again to no avail. So three ladies of the chapel decided to pray for the Lord to provide a piece of land. Mrs Jemima Boyce, a Local Preacher, Mrs Lucy Hughes and one other lady held a prayer vigil. The next morning, Lucy Hughes, who was the Housekeeper at Brailes House, where the Lord of the Manor of Brailes, Henry J Sheldon, J.P., lived was summoned into his presence and told that the Methodists could have a plot of land on College Green opposite the existing chapel. This decision came as a complete surprise because Mr Sheldon had turned down previous requests for land on which to build a larger chapel. No time was lost, and that same morning the land was marked out in readiness to proceed with building a new chapel. 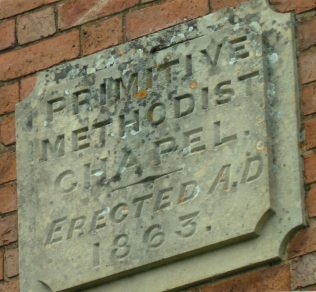 The new chapel was built by William Pickering, a Trustee at the existing  chapel, a local stone mason and builder at a cost of £319. This was at a time when the average farm labourer’s pay was about 8/- a week. The Trustees were very cautious about the size of the chapel and actually changed the original plans to keep costs down – a false saving as they found it necessary to add an extension a few years later.

There was no money left after the building was completed to install an organ or harmonium, so the singing of hymns was accompanied by a violin and clarinet.

It would appear that both invitations were turned down as the Banbury Advertiser of Thursday 24th September 1863 carried the following report:-

“The New Primitive Methodist Chapel was opened on Sunday last by Rev J Herridge of Leamington. On Monday a Tea Meeting was held in the New Chapel when about 350 partook of the good things provided, after which there was a Public Meeting presided over by Mr Richard Brazier and addresses were delivered by Messrs Herridge, Platt, Tuck and E Cox. The proceeds of the various services amounted to about £100.

The first Trustees of the New Chapel were:-

Following the opening of the new chapel, there were three services every Sunday and regular Prayer Meetings on weekdays at 5.00am before the men walked to their places of work. Open-air services were also held regularly as were processions of witness through the village. Members of the congregation were exhorted to attend chapel regularly, partake of the Sacrament of the Lord’s Supper and join in the regular Lovefeasts.

A Lovefeast was a general gathering of all the members where a simple meal was eaten followed by hymn singing and personal testimonies.

The Banbury Primitive Methodist Circuit Plan for the July-September Quarter of 1870 includes the names of 3 Brailes Local Preachers – E Simms, G Clifton and J Boyce. By 1890 there were 9 Brailes Local Preachers – J Boyce, F Bryan, R Matthews, T Clifton, M Boyce, H Matthews, W Bradley, R Hawtin and W Burrows. They would often have to walk many miles to keep their Preaching Appointments in all weathers. Two of the preachers were women – Mrs J Boyce and Mrs H Matthews – the Primitive Methodist Connexion was the first branch of Methodism to encourage women to become Local Preachers.

In 1906, Rev Alfred Bateson of Banbury was appointed Minister of the Brailes Chapel. He persuaded the Trustees to open a Fund to obtain an organ. He was the principal fund raiser and as well as collecting donations from the Circuit he obtained a grant of £50 from the Carnegie Organ Fund. The organ was purchased from Thomas Jackson of Oxford for £100 and installed in 1907. At the opening in 1907 the Chapel was full to hear an organ recital given by Professor O Sherman Marshall of Banbury with solos sung by Mrs Bateson.

In the 1950s it boasted a Sunday School of more than 40 scholars that met twice on Sundays at 10.30am and 2.30pm under the leadership of Miss Alice M Matthews, Miss Marion Laflin, Mr Trevor Wilde [before he became a Local Preacher], Mr Edwin Boyce and Messrs David and Derrick Matthews. Later Miss Sylvia Painter was Sunday School Leader but when she resigned the Sunday School folded and the congregation subsequently declined.

The Sunday School Anniversary each July attracted large congregations and was followed by the Sunday School Outing each August usually to Wicksteed Park at Kettering, the Dassett Hills or to Sutton Park near Birmingham.

There was a resident Minister in Brailes in the 1950s. Among those remembered with great affection were the Rev James H Watson [Supernumerary Minister], Rev David A Clarkson who boarded with Mrs Alice Wiggins, Rev Reynolds J Le Page, Rev Robert Rowlands and Rev Peter Burnett.

Regular Local Preachers included Mr Albert H Cross [Brailes], Mr Victor Messer [Epwell], Mr W Soden [Epwell], Mr Ross Atkins [Greatworth], Mr Stanley Hollis [Woodford Halse], Mr Cyril Cross and Mr Peter Neale. There were also regular visits by students from Handsworth Methodist Ministers’ Training College in Birmingham, one of whom was Rev Stanley M Weary before he was stationed in the Banbury Circuit. Major Hills, a retired Salvation Army Officer who came to live in Brailes in the mid 1950s was a regular preacher for many years, as was Rev Eric Butler, a Supernumerary Minister who came to live in the former Wesleyan Methodist Chapel in Lower Brailes [ in Chipping Norton Circuit but closed in the early 1960s and converted into a dwelling house].

The best attended services were the annual Harvest Festival Services in October when the Chapel was always beautifully decorated and the scent of flowers and garden produce made the services extra special. After the Monday evening service the produce, other than tins and packets, was sold by auction by Mr W P Manley in his inimitable style. He always donated several bags of potatoes at the end of the auction to help swell the funds. After his death, his son, Mr William [Bill] H Manley auctioned the harvest gifts. Bill was also an accomplished “magician” who for many years enthralled the Sunday School scholars at their annual Christmas Party.

The Sunday School Room was extended in the early 1960s and a kitchen and modern toilets installed and was regularly used during the week by Girl Guides, Brownies and Playgroups while the kitchen was used by the local “Meals on Wheels” service.

By 2010 the Chapel only had one service each Sunday at 11.00am and there was no Sunday School. Attendances had dropped to under 10 with and so the decision was taken by the remaining members, Mr and Mrs Foster, Mrs Barbara Manley and Mrs Vera Hibberd and the Circuit Meeting to close the Chapel. The final service was held on Sunday 22nd August 2010, conducted by Rev Dorothy Hewitson, Banbury Circuit Minister, assisted by Canon Nicholas Morgan, Vicar of St George’s Parish Church, Brailes.

Written by Richard Ratcliffe from information in the Centenary Booklet and personal reminiscences from Peter Ratcliffe and Jennifer Sibley [nee Ratcliffe], Sunday School Scholars from 1946-1964. Accompanying photographs taken by Peter Ratcliffe in 2016.