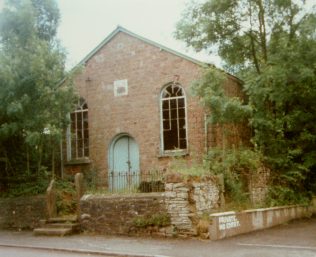 The Primitive Methodist magazine from October 1852 contains an account by George Grigg of the opening of the Primitive Methodist chapel in Cleaswell – which must be a transcription error or variation in local name. “ In this village Oliver Cromwell concentrated his armies, fought a battle, and won a victory. Here, also, is the extensive mansion of the late Earl of Dunraven, but it is now vacated ; the sound- of the harp and the viol is no longer heard therein; the once splendid edifice is sinking into ruin, and, like all earthly greatness, seems likely soon to pass away.“

Primitive Methodism came to Clearwell by accident in 1837 through bro. Richards getting lost on a journey from Pillawell. The society grew with particular involvement of mother and son, Mrs and Josiah Stephens. The new chapel opened on July 18th 1852 with sermons by Rev B Jenkyn  and Rev N Pascoe.

The total cost was £120 of which they had raised £40.  Particular thanks went to Messrs. J. and B. Stephens, to Mr. W. Stephens, Mr. J. Hewlett, for a donation besides hauling most of the lime and building-stone gratuitously; to the farmers who kindly sent their teams to haul a quantity of building materials; to Mrs. Beech, for a handsome cushion for the pulpit; and to Mr. Constance, for the loan of his large room on two occasions.