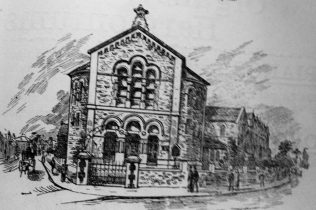 Bristol Eastville Primitive Methodist chapel, founded in 1873 was located at the junction of Fishponds Road and Stapleton Road.

In 1890 they started building to replace the “little, inconvenient” Sunday school building with a new one. It would cost £400, all of which they expected to have raised by completion.

Its registration for marriages which dates from 1886 was cancelled in 1971 and the chapel closed shortly after. On Google Street View in 2014 the site is shown as occupied by offices – Ashbourne House.