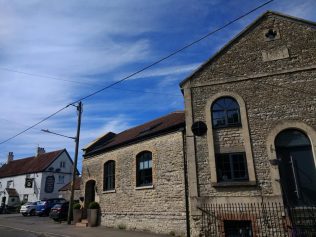 The village was missioned in 1834 and the Religious Census of March 1851 records Primitive Methodists using a shared building, managed by Hugh Bennetts, a Primitive Methodist local preacher, who submitted the return. It held 40 but that clearly was not enough; “the Congregation is often Fiftey or More”.

To find increased accommodation, Mr Bennetts bought the only freehold land in the village and sold part of it on for the society to built a chapel 20′ x 15′, 13′ high to the wall plate.  It had a deal floor, a blue slate roof and cost £90 of which one third had been raised at the time of opening.  It was lit by “a somewhat brilliant camphene lamp”

Donors included Mr Bennetts (for the Bible), Mrs Bennetts (for a handsome cushion) and Mr Humphries (for a pulpit hymn book). Preachers at the opening services were H. Cossam Esq,. D Knapp, Rev CT Harris of Stroud and the superintendent minister.

In due course it became Pucklechurch Methodist church, but by March 2009 in Street View it has become a private house, still proudly bearing its 1851 date stone.  Its immediate neighbour to the north west is the Rose and Crown.

Thanks to Alan Clarke for providing the picture.