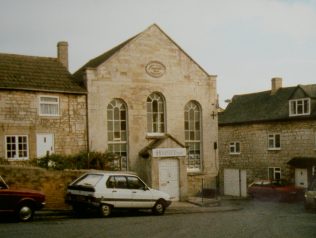 The Victoria County History says Primitive Methodists had been established in Painswick in 1829, meeting in a room in Vicarage Street, until their chapel was built in 1849. The inscription over the door however says 1854 (although it might be 1853, 1834 or any other variation. See below – it’s hard to read.)

It is a grade 2 listed building and the description is as follows:

The Primitive Methodist magazine for December 1854 contains an account by Thomas Hobson of the opening of Painswick Primitive Methodist chapel in 1854 (see above). It explains that in the preceding 5 years the society had met in a room rented for £4 yearly.  The congregation numbered around 40 in 1851.

A house was purchased for £80 in October 1853 and Ebenezer chapel erected on the garden in front of the house at a further cost of £180.  Mr Hamlett gave and engraved inscription stone.  The overall debt was £180. The house yielded an annual income of £3.