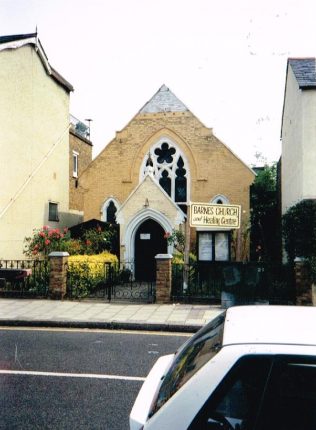 Barnes Primitive Methodist chapel began life as Wesleyan Methodist.  In October 1867 Josiah Mee, a student at the Wesleyan College on Richmond Hill, purchased from The British Land Company two building plots on White Hart Lane for the sum of £96.  The church was open for worship in April 1868.

In 1906 the President of the Wesleyan Conference authorised the sale of the church,  “the said land and Chapel being no longer needed …..in consequence of the erection of new premises on another site.”    At that point the building was bought by the Primitive Methodists and operated until 1966.

On 30th December 1966 the building was purchased by Sidney Ernest Wiles for £4,450 and became the Christian Spiritualist Barnes Healing Church.