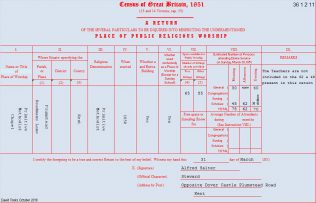 The 1851 Census of Places of Religious Worship contains an entry for Plumstead Primitive Methodist chapel in Deadmans Lane.  At that point it had only been open for a year; 30 people attended in the morning and 40 in the evening.  48 children attended the morning Sunday school, 62 in the afternoon and 30 in the evening. The steward, Alfred Salter completed the return.

“Our chapel here having been considerably enlarged, was re-opened on Sunday, June 29th, 1856, when two sermons were preached by the writer to large and respectable congregations. In the evening we were favoured with a gracious influence, and three souls professed to find peace through the blood of the Lamb. On Monday we held a tea and a public meeting, and, on the whole, we have done well. The enlargement cost about £66, towards which we have obtained, from all sources, about £43, thus adding to the debt only £23 In the above we have not included about £12 worth of labour gratuitously supplied by the mechanics connected with the society. We are thankful to the Giver of all good for the realization of our desires, and the church and congregation have greatly increased within the past twelve months.”

In the 1866 magazine, the society is said to have a “good but unfinished chapel”: so when they could get the money together, they added vestries, a copperhouse and a boundary wall.  Celebrations included the obligatory tea, provided free for 250.

What else is known about this chapel?