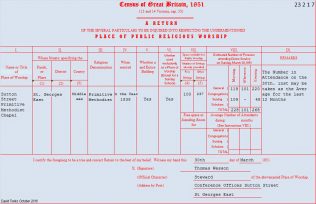 The 1851 Census of Places of Public Religious Worship, completed by Thomas Wesson, the Steward, says that the chapel was opened in 1838. It declared morning and afternoon attendance of over 100 worshippers and over 200 in the evenings. The Sunday School had over 100 children attending in the morning and nearly 50 in the evening.

G Austin writes an account in the Primitive Methodist magazine of the chapel re-opening after renovation on 30th February 1848.

Joseph Toulson contributed a note to the Primitive Methodist magazine in 1853 about the re-opening of Sutton Street Primitive Methodist chapel in the London Third circuit after cleaning, painting and improvements. Congregations were improving – thirteen new members in the previous quarter.

A year later, at the end of 1854, they were at it again; the chapel end wall was taken down and it was made 11′ longer, and the ceiling was raised. A new Sunday school for girls was built behind the chapel – previously they had been teaching “110 female scholars at some distance from the chapel, and at considerable expense.” The changes cost £310 of which they had raised £154.

Mrs. Hawkins on behalf of the Sutton-street Band of Hope, presented the trustees with £5, a new Bible and hymnbook; to Messrs. Walton and Gowland donated £5; Mrs. Gordon collected £10.

In 1861 G.H.McGill, the vicar of neighbouring Christ Church in Watney Street, says it seated 120, and estimated that the ‘Ranters’ Sunday School’ had 100 attenders; however, the 1864 Primitive Methodist Magazine says it seated 400, but was unsatisfactory because it was in a yard concealed from view by dwelling houses.