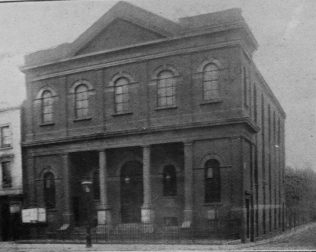 It had begin life as a Wesleyan Methodist chapel in 1824 on what was then called King Street (it became Plender Street in 1937).  When the Wesleyans built a new church at Camden Street in 1860, they sold their original chapel to the Primitive Methodists. The building was rebuilt in 1890.

On Methodist Union in 1932, the Primitive Methodist chapel was retained as the main church.  The Camden Street premises became a mission hall and youth centre, c.1939 until they were sold in 1959 and later demolished.