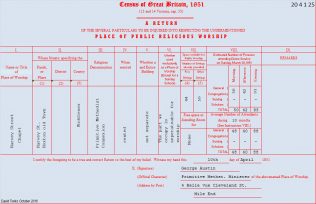 For a number of years the society had met in a room or a small chapel in Harvey-street. After a number of unsuccessful attempts, they secured  Philip-street chapel , (now spelled Phillipp Street,  N1 5PB) off Kingsland Road, previously belonging to the Established Church. “It is situated in the midst of a dense population, and there is no church or chapel very near it. “

The building is labelled as a chapel on the 1896 1:2,500 Ordnance Survey map, but by 1916 it is not labelled.  The area was later comprehensively redeveloped.