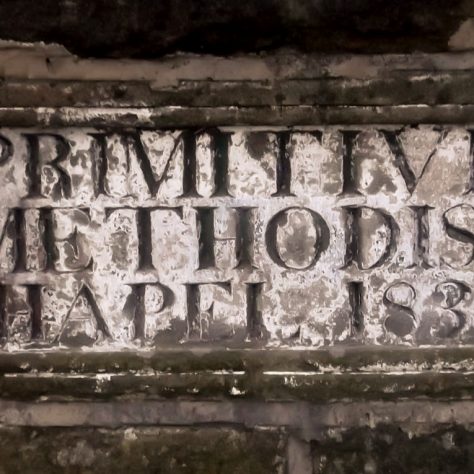 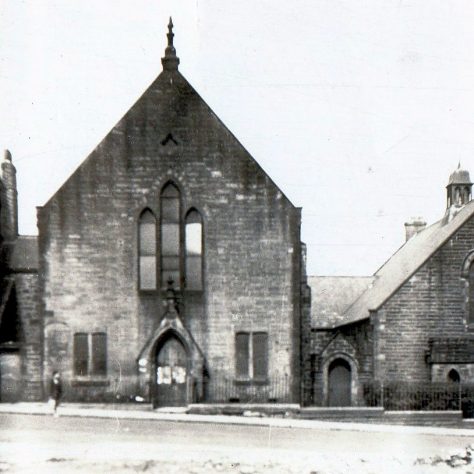 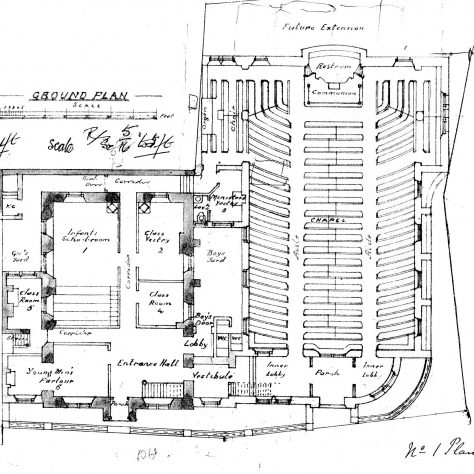 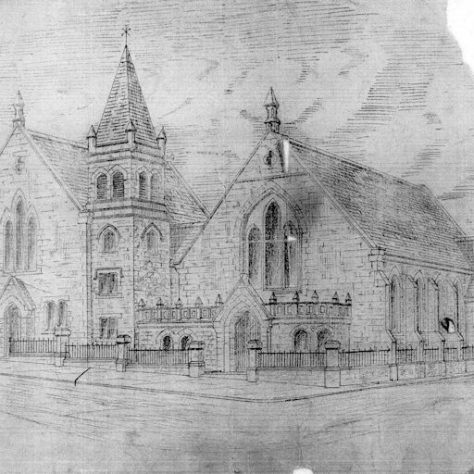 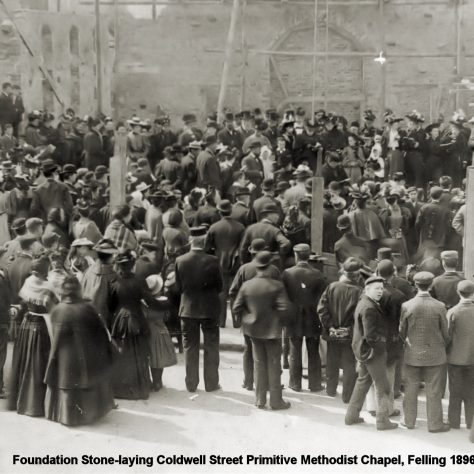 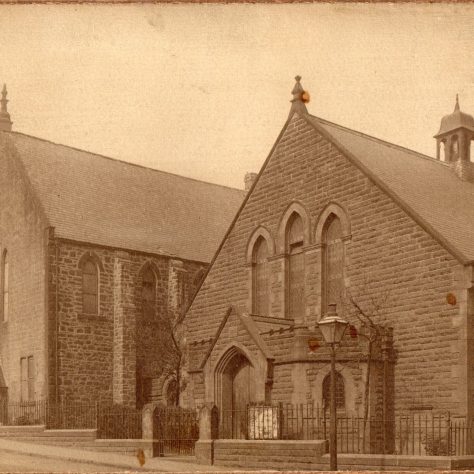 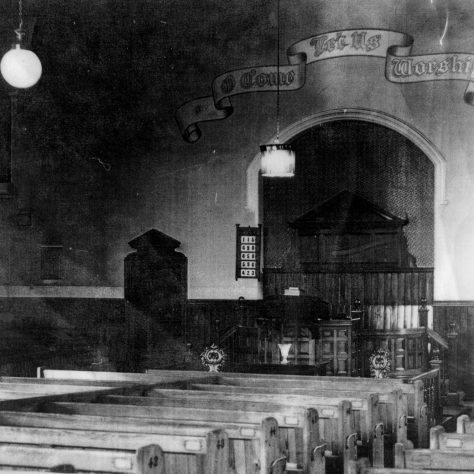 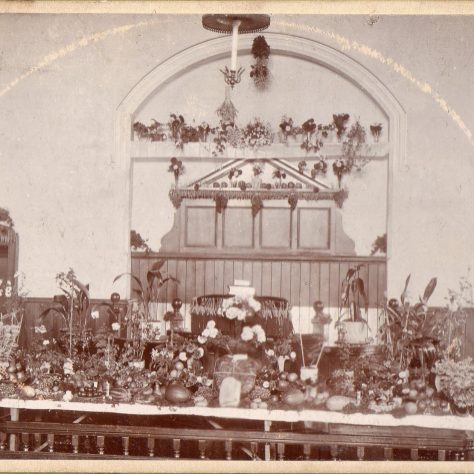 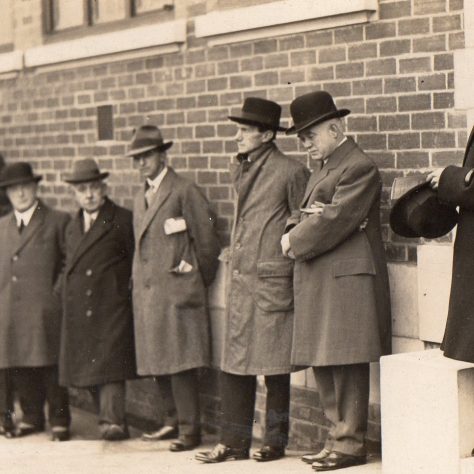 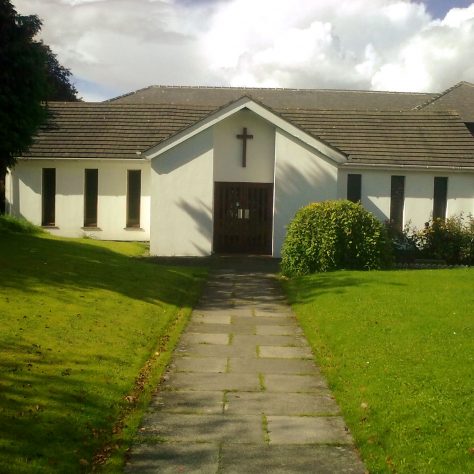 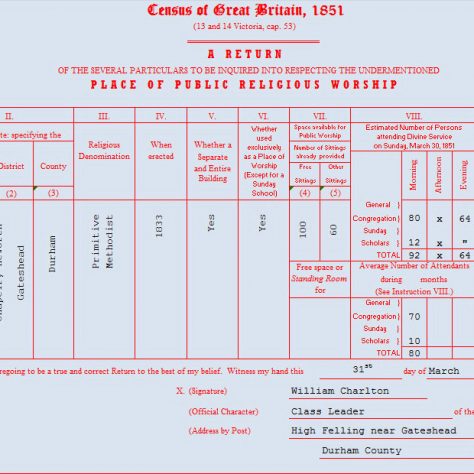 The Primitive Methodists began meeting in (High) Felling in the 1820s in the home of a Mrs Shepherd. Later meetings were moved to a room in the Parish Workhouse where John Thompson, a Wesleyan, was the Master. On 18 July 1833, the Trustees secured a piece of land behind what is now the High Street on which to build a chapel. Although described as small, the chapel could seat about 150 people. The following extract is from the 1946 Jubilee handbook of the Coldwell Street premises:

“…it was a tiny place, less than the smallest chapel now in our Circuit. Built as the usual rectangle with the entrance and a large window in the north side facing the High Street. A terraced path ran along the lower side to a pleasant stretch of grass against the south wall. Inside was painted wainscot with a flagged floor that was always bright with rubbing stone. It was fitted with high old-fashioned pews with doors and clasps. It was lit with hanging oil lamps. The choir was screened off from the congregation by a red plush curtain”.

The building cost £130 to build and on its opening there remained a debt of £100. For the next 30 years, further monies were spent on improvements to the buildings until they became too small for the growing Society.

In 1864, John Hallam, Hugh Gilmore and William Gelley led revival services at Felling with great success. Such was the results of their endeavours that land for a new chapel was secured at Coldwell Street and the first chapel on that street was opened on 10 September 1864 – 340 members sat down to a tea after the opening service. But even this building proved to be inadequate and by 1877, following a further revival event led by William Johnson and John Tyson, the Trustees were looking to build another new chapel.

In 1896, foundation stones were laid on land adjoining the chapel – later to be known as the “Lecture Hall” – for a church that could seat 500 people and with school accommodation for 500 children and their teachers. The cost of the new premises and that of converting the old chapel, amounted to £1,830.

1929 saw further expansion of the Coldwell Street Church with a new Sunday School opening at the rear of the premises, on 30 October 1929. The 1864 building remained until 1946 when it was demolished and the ground prepared as a memorial garden to those of the town who had lost their lives in the war. It was also decided to add an organ by Harrison & Harrison of Durham to the Church as a memorial.

Methodist Union in 1932 had already drawn the 7 Methodist Churches in the town closer together but the union was made more real on Good Friday, 31 March 1972 when fire ripped through the Coldwell Street church causing extensive damage. As much as possible was saved from the building – the organ was moved to Holly Hill (ex WM) church whilst the stained glass windows were dismantled and put into storage. The church building was demolished and the congregation joined their friends at Holly Hill. Later, the 1929 Sunday School building was re-opened for youth work and other events.

Plans were soon afoot to commence building a new church at the Coldwell Street site and, as a result of the other churches closing, a new Society was formed. A new church was opened on 18 December 1982 with the 1929 Sunday School rooms and hall being added to the suite of buildings. Holly Hill church was sold and the income used to offset the building costs.