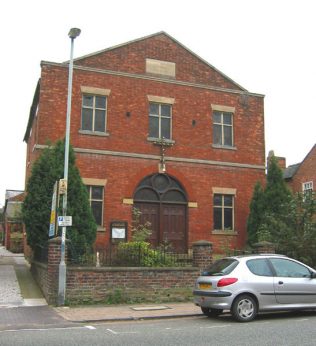 zoom
Nantwich: Return from the Primitive Methodist chapel in the 1851 Census of Places of Public Religious Worship
transcribed by David Tonks

Built in 1840, the chapel closed in 2001, and the building has been partially converted to residential use.

Early visits from Nonconformist preachers were not welcomed in Nantwich. In 1753, John Wesley was “saluted with curses and hard names”, while that same year, George Whitefield was met by angry crowds who tried to drive a bull into his audience, but were foiled when the animal fell into a pit.

William Clowes, one of the founders of Primitive Methodism, came to Nantwich with John Wedgewood and preached at The Barony in 1817. A building on Marsh Lane was purchased in 1826 for £100 and was used as a chapel until 1840, when the chapel on Welsh Row was built by Thomas Bateman.

The Welsh Row site, donated by George Wilbraham, was a former cloth merchants’ hall.  Opening on 21 October 1840, the Welsh Row chapel seated a congregation of 600. It originally fell within the Burland Primitive Methodist circuit, but in 1844 a minister was appointed in Nantwich and the town became the centre of the circuit. The several other Nonconformist places of worship in the town in 1850 also included a Wesleyan Methodist Church and a Unitarian Chapel on Hospital Street, an Independent or Congregational Chapel on Monks Lane, a Baptist Chapel on Barker Street, a Friends’ Meeting House on Pillory Street, and a Wesleyan Association Chapel on Castle Street. A second Primitive Methodist chapel, the Wood Memorial Chapel, was built in 1881 at The Barony by John Wood

As of 2010, the rear of the building on Chapel Row is used for housing, but the main chapel is derelict.

The Primitive Methodist Chapel is a two-storey building in red brick with stone dressings, which is set back from the street behind a walled forecourt. The front façade has three bays with a pediment bearing a stone tablet with the inscription “Primitive Methodist Chapel. A.D. 1840.”  This face also has a stone string course and cornice. The wide central entrance is reached by a flight of steps; it has decorative stone inserts, a semi-circular brick arch above and a fanlight. The windows have undecorated stone lintels and sills.

Illustrated is a local hymn book, presumably consisting of the core hymns that the Welsh Row Primitive Methodist Church wanted to sing, and it indicates that the contents are culled from the Hymnal, the Supplement to the hymnal, and the Sunday School hymnal. The booklet has  20 pages and consists of 68 hymns.

Information gleaned from many sources for the Archie Earl Collection

The opening of the chapel is described in the Primitive Methodist magazine July 1842 pages 256-7. The account is in the attached document, transcribed by David Tonks (added Sept 2107 by CH)