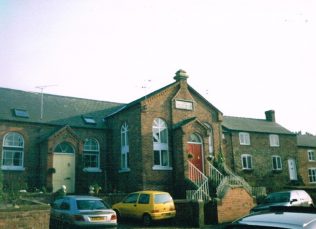 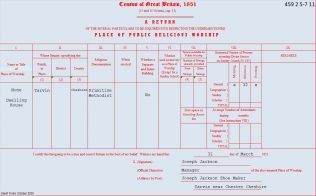 zoom
Tarvin: Return from the Primitive Methodist preaching place to the 1851 Census of Places of Public Religious Worship
transcribed by David Tonks

Tarvin village has always been home to a strong Primitive Methodist following and has been recorded having meetings every Thursday in local houses since 1842. (In 1851 Joseph Jackson, a shoemaker, tells us that they worshipped in a dwelling house with 32 people attending on Census Sunday).

The chapel was built in 1865, and a Sunday school in 1880. The chapel building included a seated gallery in 1871. The chapel was fitted with pews, but chairs were fitted at the end of the pews due to the large congregation size and the choir that was part of the chapel.

The chapel was called “bottom chapel” by locals to distinguish it from the “top chapel” further up the hill which was a Wesleyan chapel built 10 years later.

The chapel was part of the Chester circuit which was later divided and became part of the Chester III Circuit. From 1932 this was changed again as the Wesleyan, Primitive Methodist and United Methodist Churches were joined together in a circuit known as Tarvin Road. In 1963 Zion chapel became part of the Tarporley and Kelsall circuit. This chapel celebrated its centenary in 1965 but closed in 1984 just after joining the Sandbach and Alsager circuit.

The seated gallery was removed in 1985 and renovated into a residential house.