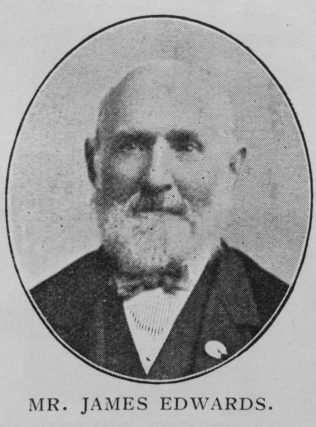 Born in Presteign, Wales, in 1828, of Godly parents, James Edwards was converted in his eighteenth year. In the Brierley Hill Circuit he found his true sphere in the Sunday School, in which he laboured until prostrated by his last illness at the great age of 82 years, and, in addition, filled, at various times, most offices in school and church.

Removing to Hanley in 1870, Bro. Edwards joined the church at Marsh Street, and became teacher to a class of young men, all of whom were soon converted, and are to-day serving God. His influence was described as resistless. Coming, in 1880, to Kidderminster, Bro. Edwards was one of the mainstays of the Church until his death. Last year, he was elected President of the Sunday School Union of Kidderminster and neighbourhood.

A lingering illness terminated by the call to eternal rest on August 11th, 1910. The funeral was conducted by Rev. Samuel Harry, assisted by religious leaders of the neighbourhood, in the presence of a large concourse of friends and school children. Impressive memorial services were held on September 18th, when various tributes were paid to a rare spirit and invaluable services.

James was born in 1828 at Presteigne, Radnorshire, to parents Evan, a labourer (1841), and Margaret.

He married Ellen Reynolds (abt1825-1871) in late 1853 in the Bridgnorth Registration District, Shropshire. Census returns identify one child.