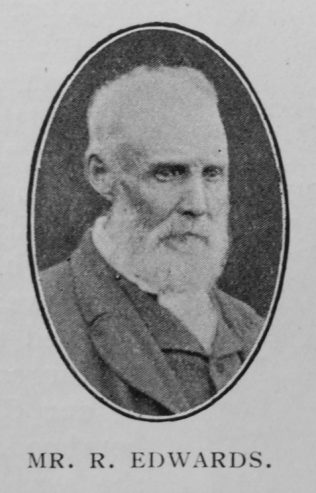 Richard Edwards was born in the year 1836 at Little Sillie, in the neighbourhood of Presteign. He began life as an agricultural labourer, and married a Miss Davies, who belonged to the same district. Soon after marriage he joined the Radnorshire police force, and was stationed at Bleddfa. It was there that he came into touch with our Church, and became a member of the little society, which held its services in an old thatched farm-house called Penrhewllan, the home of a brother named Corfield.

The story of how he left the police force is interesting and reveals the man. At a police court held at Bleddfa, Richard had to give evidence. The case was dismissed, and the Chief Constable told his subordinate that in future he must swear evidence that would convict, or he would no longer be his man. Richard, after a sleepless night, packed up his uniform and at once resigned his position. His own words on the matter to the writer of this memoir were: “Seeing that the truth did not satisfy, I resolved to take up an honest calling.” His new calling was both humble and arduous. He took the old turnpike gate in the same parish and went to break stones on the turnpike road.

He was put on the plan in the year 1864 and soon became a very acceptable local preacher, powerful in utterance and aflame with a burning zeal for the conversion of sinners. He was often heard praising God for giving him strength to leave his old calling, and he himself believed that much of the power of the Holy Ghost in his life was due to the change. He removed to Knighton and lived in the tollgate house. Here he was employed by Inspector Udel, of the L. and N.W. Railway Co., the latter being one of our local preachers.

Many and severe troubles befell him, but his life shone out in greater usefulness and blessing. Friends testify to his liberality in supporting the funds of the Circuit. All who came in touch with him in worship will remember his fervent response. His last illness was short. He died on December 12th, 1910, and was buried in his favourite village of Whitton. A more faithful man I never knew.

Richard was born in 1836 at Little Sillie, nr Presteign, Radnorshire, to parents Richard, who worked the land, and Elizabeth.

He married Elizabeth Davies (abt1836-1913) in the summer of 1857 in the Presteigne Registration District, Radnorshire. Census returns identify two children.