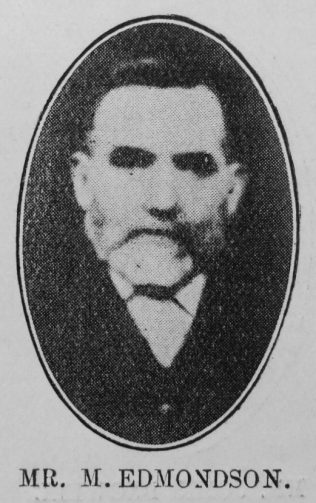 Transcription of Obituary published in the Primitive Methodist Magazine by Colin C. Goodall

The Skipton Circuit has suffered a great loss in the death of Matthew Edmondson, one of the oldest of its local preachers. Born at Carleton on March 6th, 1845, Mr. Edmondson, when only a lad, decided to become a follower of Christ. At the age of fifteen he became a member of our church, and when seventeen he was on “full plan” as a local preacher, and for nearly forty-seven years he continued in this position.

He was well received in the various pulpits on the circuit, and was also much sought after by other circuits. Twenty-seven years ago he removed to Skipton, and was connected with that society up to the time of his death. He was a trustee for several of our chapels: had been superintendent of the Sunday School, class leader, society and circuit steward. Up to within a short time of his death he was a regular and consistent Sunday School teacher. He filled all these positions with great acceptance, and did not stint his energies in anything he had to do.

One of the latest services he conducted was an ordination service on July 12th, when he delivered the charge to two young men who were received into the ranks of the lay ministry. Perhaps Brother Edmondson was seen at his best in the prayer meeting pouring out his soul to God; though he also dearly loved a camp meeting day, especially the missioning through the streets in old time Primitive Methodist fashion. For some time before his death he was in-failing health, and towards the end he suffered much. But through all he was divinely sustained, and his trust in God never faltered. He fell asleep in Jesus on October 28th, 1908.

The funeral was very. largely attended, many local preachers and others from the town and district being present.

A memorial service was conducted by the writer on Sunday, November 8th, in the presence of a large congregation. We commend the sorrowing widow and family to Him who alone knows how to cheer and sustain in life’s deepest troubles.

Matthew was born on 6 March 1846 at Carleton, Yorkshire, to mother, Hannah. He was baptised on 29 November 1846 at St Mary, Carleton-in-Craven. The baptism record suggests that his father was John Thornton, a drover. This is confirmed on his marriage certificate.

Note: Records suggest he was born in 1846, not 1845 as stated in the obituary. Early records spell the surname ‘Edmundson’.