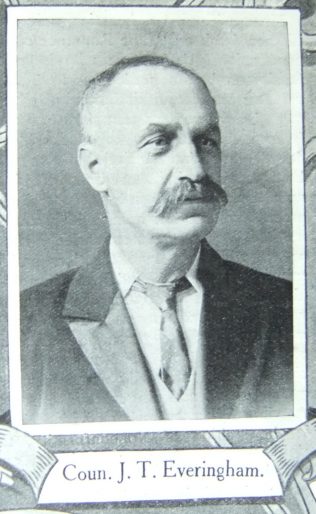 The subject of our sketch was born at Market Weighton, September 5th, 1857. His father was a local preacher, and occupied a foremost position in Pocklington Circuit. Our brother has been a member of the church for thirty-two years, during which time he has held the positions of society steward, choirmaster, chapel steward, assistant superintendent of Sunday School, circuit steward, and local preacher, all of which positions, with the exception of the first-named, he still holds with great credit. Twice he has represented his Circuit in District meeting, and once his District at Conference. His worth has been recognised by the ratepayers of Pocklington, and for seven years he has represented them on the Urban District Council, which body –during the present year – unanimously offered to him the Chairmanship, but he declined the honour. We wish for Mr. Everingham and his dear wife many years of useful service.

John was born at Market Weighton, Yorkshire, to parents John Everingham and Margaret Galland. John, senior, was a grocer and draper. John was baptised on 11 October 1857 at Pocklington, Yorkshire.

John was a master tailor and outfitter.