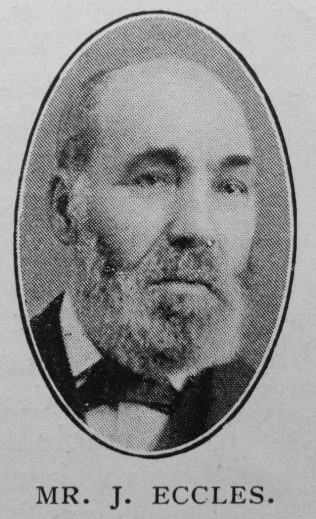 Transcription of obituary published in the Primitive Methodist Magazine by W. Eccles

Mr. Joseph Eccles, the writer’s father, was born in 1836, at Escrick, Yorks. Converted in 1866, from then until his death, December 17th, 1910, he was a consistent and active member of our Church. For many years he did valuable service as Class Leader, Sunday School Secretary, and especially as Local Preacher. He was in great request for the pulpits of various denominations.

During his lengthened period of labour he saw many conversions. From his sermon-journal I find that he preached in the Circuit Chapel at Tadcaster no fewer than three hundred and twenty-times. He had a good grasp of the essentials of Methodist Theology, and his own witness to the saving power of Christ was definite and certain. His Circuit on four occasions honoured him by sending him as delegate to District Meeting. Once also he was District Committee delegate to District Meeting, and he was a member of the Hull Conference of 1881.

During the last few years his  health failed to some extent, and broke down completely after mother’s death in November, 1909. Nearly fifty years they had travelled together in happy married life, helpers of each other in both temporal and eternal matters. All their children are earnest Primitive Methodist workers.

In his thirteen months’ illness father took a keen and constant interest in Connexional life. He longed to work again if it might be God’s will, but was fully ready to go. He knew Him to whom he had entrusted everything for so long; and just before Christmas, went to be with the Lord in light. His remains were laid to rest in the Tadcaster Cemetery (of which he had been the curator for thirty-four years), the Revs. J.P. Osborne, J. Pearson, and J. Olliver conducting the funeral. A Memorial Service was conducted on Sunday, January 8th, the Rev. J. Olliver preaching an appropriate sermon.